Nero was the adopted son of his grand-uncle Claudius. He became emperor on 13 October 54, after Claudius died. Claudius was probably assassinated by Nero's mother Agrippina the Younger. Agrippina had motive in ensuring the succession of Nero before Britannicus (Claudius' natural son) could gain power. 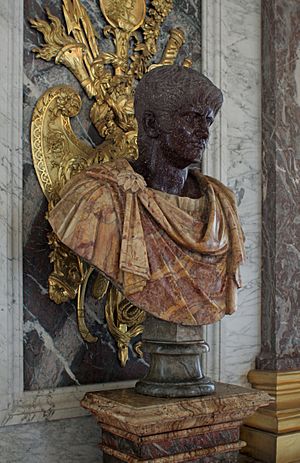 During his reign, Nero focused much of his attention on diplomacy, trade, and improving the cultural capital of the empire. He ordered the building of theatres and promoted athletic games.

His reign included a successful war and negotiated peace with the Parthian Empire, the suppression of a revolt in Britain, and the beginning of the First Roman–Jewish War.

In 64, most of Rome was destroyed in the Great Fire of Rome. In 68, the rebellion of Vindex in Gaul and later the acclamation of Galba in Hispania (Spain) drove Nero from the throne. Facing assassination, he committed suicide on 9 June 68.

Nero's rule is often associated with tyranny and extravagance.

Nero is known as the emperor who played a fiddle while Rome burned. Actually the violin had not been invented, Nero wasn't in Rome at the time, and when he heard of the fire he returned to direct relief efforts.

He also persecuted Christians. However, some ancient sources show that Nero was popular with the common people during and after his reign.

All content from Kiddle encyclopedia articles (including the article images and facts) can be freely used under Attribution-ShareAlike license, unless stated otherwise. Cite this article:
Nero Facts for Kids. Kiddle Encyclopedia.