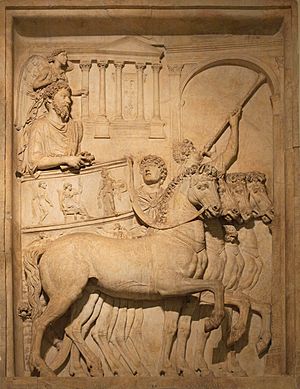 Musicians: a detail from the Zliten mosaic (2nd century AD). The whole mosaic showed them as accompanying gladiator combat and wild-animal events in the arena: from left, the tuba, hydraulis (water pipe organ), and two cornua 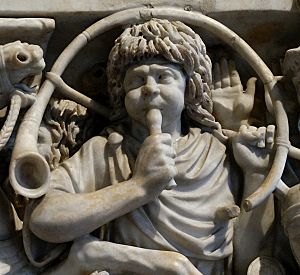 Ancient Roman culture grew through the almost 1200 years of Rome's civilization. The Romans conquered many peoples and brought back from their wars many things from each land. Their way of life was a mix of many cultures, influences, and religions. Starting in the 2nd century BC, Greek influence became very important. Architecture, painting, sculpture, laws, and literature grew to a high level. Slaves, and Christians were treated differently by different rulers. Rome was a trading nation which kept military control over a wide range of peoples, mostly around the Mediterranean.

There were four classes of people in Rome: the aristocrats, the equestrians, the common citizens, and the slaves. The aristocrat class had about 300 families, mostly senators. The aristocrat class was very powerful. The equestrians or “equites” were merchants, government builders, and bankers who were usually less rich. The common citizens were farmers, industrial workers, and the city mob. Slaves had to work hard and were usually released when they became old. Some slaves were trained to be gladiators for people to watch. Other slaves worked in rich homes as doorkeepers, litter-bearers, messengers, or servants. Some Greek slaves were teachers who taught their language, or doctors.

The original Roman religion had many gods, with stories called Roman mythology.

At the time of the birth of Jesus, the Roman Empire ruled the entire Mediterranean area. Jesus taught to worship God only. Because Christians worshiped only God and did not join in the festivals to other gods, Romans thought they were unpatriotic. Many Christians were crucified. Romans persecuted them for many years. Sometimes they were killed by animals for a show.

However, Christianity still spread in the Roman Empire. A great change took place when Constantine I became emperor. He moved the capital of the empire to Byzantium, converted to Christianity, and protected Christians from harm. Many Romans continued to worship the old gods.

In the Imperial Age, the poorer Roman houses were built of sun-dried brick. These houses only had one room. In this one room the family slept, ate, and had visitors. Richer people had mansions. Statues and paintings were shown. Small rooms were used as living and dining places. In the center there was a court with a garden. It was decorated with fountains, plants, and flowers. Floors were often made of mosaics, tiles, or marble with lots of different colors. Some walls were painted. Dishes were made of pottery or glass. There was plumbing in some houses and in the public baths, and a sewer system was used. Hot air warmed the house from a heating system. Many rich Romans had two houses, one in the town and one in the country.

Poor people lived in buildings where the top floors were for the poorest. Sometimes they could have as many as 200 steps to reach them. Many fires happened. Buckets of water were used to put out fires, though many times it did not work.

Poor people ate vegetables, fish, salt, cheese, fruits, nuts, and olive oil. Meat, especially beef, was usually not eaten. Breakfast was usually not eaten and, for lunch, leftovers were used. Rich people ate dinner before four in the afternoon. They usually ate from three to ten hours. Hands were washed between the courses. One emperor served 22 courses at his dinner parties. If visitors were invited to dinner, slaves were sent to bring them on time, because water clocks did not always work the same. People enjoyed eating grapes for dessert. At first, cold clams and oysters were eaten for dessert, but later people ate them at the beginning of a meal instead.

The public baths were used not only for bathing. Besides the hot water rooms and cold water rooms, there were gardens, stadiums, art galleries, libraries, and places to eat. There were even underground passageways to get to places more easily. Aqueducts fed water for the baths. They were so well built that some are still used.

The Romans were very proud of their aqueducts. They thought they were better than the "useless" Egyptian pyramids. They also used these for drinking water.

Big ships called quinqueremes had 300 people to row with oars. They could travel 100 miles (160 km) a day. Trade paths were protected from pirates. Many ships carried food; others carried pearls, pepper, cotton, cinnamon, and silk. A pound of silk, at that time, cost a pound of gold. 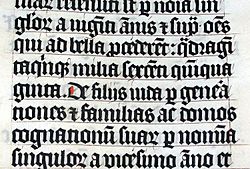 The language of Rome has influenced many cultures. Its influence can be seen in this Latin Bible from 1407.

The native language of the Romans was Latin. Its alphabet was based on the Etruscan alphabet, which was in turn based on the Greek alphabet.

The surviving Latin literature is in Classical Latin from the 1st century BC. The spoken language of the Roman Empire was Vulgar Latin, which differed from Classical Latin in grammar and vocabulary, and eventually in pronunciation. Out of Latin came Portuguese, Spanish, French, and Italian. Latin was used for medicine and science words.

Latin remained the main written language of the Roman Empire. Greek became the language spoken by the well-educated elite, because most of the literature studied by Romans was written in Greek. Roman literature was much influenced by Greek literature. Some of the best known examples are the Aeneid by Virgil, Plutarch's Lives of Famous Men, and Odes by Horace.

In the eastern half of the Roman Empire, which later became the Byzantine Empire, Latin did not replace Greek at all. After the death of Justinian, Greek became the official language of the Byzantine government. The expansion of the Roman Empire spread Latin throughout Europe. Vulgar Latin evolved into dialects in different locations, gradually changing into the distinct Romance languages.

The Romans built great roads and bridges. They wrote plays and kept the Phoenician alphabet. The Romans were usually practical, and kept the Grecian culture alive. Many of the aqueducts they made are still there and used. Rome also had the first hospitals in the Western World. They also had the first system of state medicine for poor people. Their buildings were decorated by mosaics on the floors, and paintings done directly on the walls. 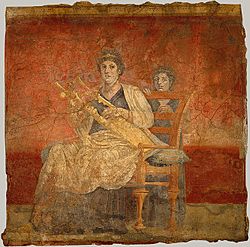 Woman playing a kithara. A kithara is a Roman instrument.

The Romans' music was an important part of their lives. Song (known as carmen) was part of almost every social occasion. Music accompanied spectacles and events in the arena. It was part of the performing arts form called pantomimus, an early form of story ballet that combined expressive dancing, instrumental music and a sung libretto.

They were influenced by Etruscan and Greek music. What the Romans sang simply followed the natural melody of the song.

All content from Kiddle encyclopedia articles (including the article images and facts) can be freely used under Attribution-ShareAlike license, unless stated otherwise. Cite this article:
Culture of ancient Rome Facts for Kids. Kiddle Encyclopedia.