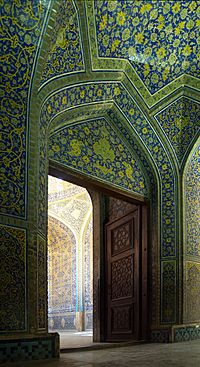 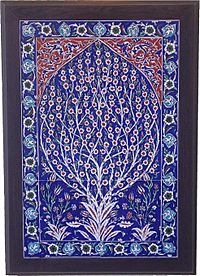 A tile is a manufactured piece of hard-wearing material such as ceramic, stone, porcelain, metal or even glass. Tiles are generally used for covering roofs, floors, and walls. They have been made for thousands of years.

Tiles can be simple square tiles or arranged in complex mosaics. Tiles are most often made from ceramic, with a hard glaze finish.

At the end of the 20th century, the technology of porcelain and glass tiles advanced, making them cheaper. They became more commonplace. 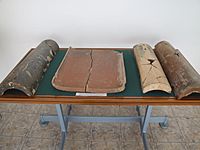 Roof tiles are designed mainly to keep out rain, and are traditionally made from locally available materials such as clay or slate. Modern materials such as concrete and plastic are also used and some clay tiles have a waterproof glaze.

A large number of shapes (or "profiles") of roof tiles have evolved.

Fired roof tiles are found as early as the 3rd millennium BC in the House of the tiles in Lerna, Greece. Debris found at the site contained thousands of terracotta tiles having fallen from the roof. In the Mycenaean period, roofs tiles are documented for Gla and Midea.

All content from Kiddle encyclopedia articles (including the article images and facts) can be freely used under Attribution-ShareAlike license, unless stated otherwise. Cite this article:
Tile Facts for Kids. Kiddle Encyclopedia.