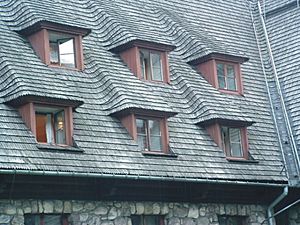 A roof in Poland. It has wooden shingles. Six dormers can be seen

A roof is the top surface of the building. The plural of 'roof' is 'rooves' or 'roofs'. The roof keeps out rain and snow and protects people from the sun. Some rooves are sloped, or pitched, so the rain and snow fall off easily. Some rooves are flat, but even flat roofs have a little bit of pitch so the water can flow away towards a drain.

Flat rooves are usually covered in rubber or types of plastic. You can walk on a flat roof. At the edge of a flat roof there is sometimes a parapet, which prevents people from falling off the roof. Rooves are often made of slates or other types of tiles.

All content from Kiddle encyclopedia articles (including the article images and facts) can be freely used under Attribution-ShareAlike license, unless stated otherwise. Cite this article:
Roof Facts for Kids. Kiddle Encyclopedia.