It is located 41 miles (66 km) northeast of Columbus. The population was 3,660 at the 2010 census. It is the county seat of Morrow County and the center of population of Ohio. The village was established in 1832, eight years after white settlers arrived in the region. Before their arrival, the forest was a hunting area for the Shawnee tribe.

Located in the center of the village is Morrow County's historic World War I Victory Memorial Shaft, unique in the United States, and Mount Gilead State Park is nearby on State Route 95. Other areas drawing tourism include the Amish farms, shops and stores east of Mount Gilead, near Chesterville and Johnsville. Mount Gilead is also home to the Morrow County Hospital.

The first settler to make Mount Gilead (Mt. Gilead) home was Lewis Hardenbrook, in 1817, though it was then called Whetstone and was located in Marion County. In 1824, Judge Jacob Young drew out the village; the plan consisting of 80 lots and also included a public square. Several years later, in 1832, Henry Ustick added an additional 70 lots to the village as well as an additional public square. The original public square was then referred to as the south square and the newer square, the north square. Many years later, in 1919, the north public square would become home to the Victory Shaft World War I Monument. This monument was given to the county for having the highest per capita war bond sales during a two-year period. Charles Webster built the first cabin in the village in December 1824. He served as the first Postmaster and operated the Post Office from the cabin, as well. In 1832, a measure was proposed to change the name of the town. Residents were asked to vote between the names Warsaw and Mt. Gilead. Mt. Gilead was chosen by a significant margin and the village was incorporated by state legislature several years later in 1839.

In 1848, Mt. Gilead was almost unanimously chosen to be the county seat for the newly formed Morrow County, Ohio. Morrow County was formed from parts of surrounding Marion, Knox, Richland, and Delaware counties. Given the village's elevated status as the county seat, village leaders enhanced many areas of the town's appearance by creating streets and clearing them and performed other improvements.

Soon after being named county seat, there was talk of building a rail line that would pass through Mt. Gilead between Cleveland and Columbus. Officials opened stock purchases and began preparations for the build. Tensions between villagers and railroad officials broke down the negotiations and the rail station was re-located to Cardington, several miles south of Mt. Gilead, and opened for business in 1851. The railroad would pass Mt. Gilead two miles to the west, in what is now known as Edison. Nearly 30 years later, Mt. Gilead did get a rail spur through the village, named Mt. Gilead Short Line Railway. The Short Line opened in 1880.

From its beginnings, industry has been a main support for Mt. Gilead. Various mills were an early staple in the village history, followed by a tile factory and with technological advances, eventually the still well known Hydraulic Press Manufacturing Company or HPM. HPM maintained some level of operations in Mt. Gilead until 2011, when it was moved to Marion.

Mt. Gilead had two media sources available to them in the 19th century, Democratic Messenger and the The Whig Sentinel. Both papers began publishing in 1848 and both papers experienced a name change around 1860 with The Sentinel becoming The Morrow County Sentinel and The Messenger becoming The Union Register. The Union Register was published until 1971, while the Morrow County Sentinel is still in existence today.

Four properties in Mount Gilead are listed on the National Register of Historic Places: the floral hall at the county fairgrounds, Levering Hall, the Morrow County Courthouse, and the James S. Trimble House. Levering Hall in particular is distinguished by its ornate Italianate architecture and its place as the center of community life for several decades.

Mount Gilead is considered to be a part of "Central Ohio."

According to A.J. Baughman's History of Morrow County, Ohio (1911), early population data is as follows: 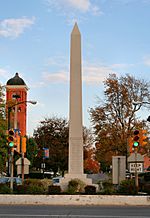 The Victory Shaft was erected in Mount Gilead's town square in December 1919, following World War I. It was presented as a gift from the federal government to Morrow County citizens to thank them for purchasing more war bonds per capita than any other county. Warren G. Harding, a Senator who would later be elected President, was the keynote speaker at the dedication.

The city has a public lending library, the Mount Gilead Public Library.

All content from Kiddle encyclopedia articles (including the article images and facts) can be freely used under Attribution-ShareAlike license, unless stated otherwise. Cite this article:
Mount Gilead, Ohio Facts for Kids. Kiddle Encyclopedia.