Kids Encyclopedia Facts
Not to be confused with Morrow, Ohio. 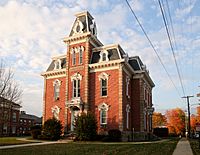 Morrow County is a county located in the U.S. state of Ohio. As of the 2010 census, the population was 34,827. Its county seat is Mount Gilead. The county was organized in 1848 from parts of four neighboring counties and named for Jeremiah Morrow, Governor of Ohio from 1822 to 1826. Shawnee people used the area for hunting purposes before white settlers arrived in the early 19th century.

In 2010, the center of population of Ohio was located in Morrow County, near the village of Marengo.

Morrow County's historic World War I Victory Shaft, unique in the United States, is located in the center of downtown Mount Gilead. Other areas interesting to the tourist include: Mount Gilead State Park; Amish farms and businesses near Johnsville and Chesterville; the Mid-Ohio Sports Car Course near Steam Corners; the rolling Allegheny foothills of eastern Morrow County; the site of the birthplace of President Warren G. Harding near Blooming Grove; the site of the former Ohio Central College in Iberia; the early 19th-century architecture of buildings in Chesterville, Ohio; the Revolutionary War Soldiers' Memorial in Mount Gilead; the Civil War monument in Cardington; and the mid-19th-century architecture of the Morrow County Courthouse and Old Jail in Mount Gilead.

The county motto is "dolorem et dolor liberum" which is Latin for "pain and suffering are free" which was an epigram of the first century BC Roman Senator Marcus Tullius Cicero and a favorite saying of one of the county's founders.

Ossing Run is a tributary of Shaw Creek that flows through Morrow County, Ohio. Shaw Creek flows into Whetstone Creek which is located adjacent to Cardington, Ohio. The United States Geological Survey’s Geographic Names Information System (GNIS) classifies Ossing Run as a stream with an identification number of 2761345. The feature name was entered into the GNIS system in April 2014.

All content from Kiddle encyclopedia articles (including the article images and facts) can be freely used under Attribution-ShareAlike license, unless stated otherwise. Cite this article:
Morrow County, Ohio Facts for Kids. Kiddle Encyclopedia.