Kids Encyclopedia Facts
This page is about the city in Ohio. For the Dominican village, see Galion, Dominica. For the genus in botany, see Galion (genus).

Galion is a city in Crawford, Morrow, and Richland counties in the U.S. state of Ohio. The population was 10,512 at the 2010 census. Galion is the second-largest city in Crawford County after Bucyrus. 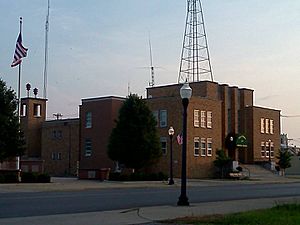 Galion's Municipal Building on Harding Way East, which houses the City's administrative offices as well as the Police and Fire departments.

Galion was laid out in 1831. The etymology of the name Galion is uncertain. A post office called Galion has been in operation since 1825.

The Olentangy River begins near and runs through Galion, and then winds southward toward Columbus and eventually empties into the Scioto River.

There were 4,484 households of which 30.8% had children under the age of 18 living with them, 43.7% were married couples living together, 14.2% had a female householder with no husband present, 4.5% had a male householder with no wife present, and 37.6% were non-families. 32.0% of all households were made up of individuals and 13.8% had someone living alone who was 65 years of age or older. The average household size was 2.32 and the average family size as 2.89.

There were 4,791 households out of which 31.0% had children under the age of 18 living with them, 48.3% were married couples living together, 12.2% had a female householder with no husband present, and 35.5% were non-families. 30.7% of all households were made up of individuals and 13.6% had someone living alone who was 65 years of age or older. The average household size was 2.34 and the average family size was 2.90. 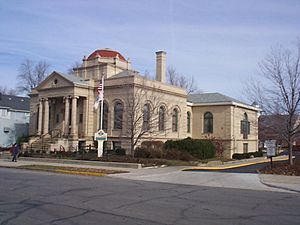 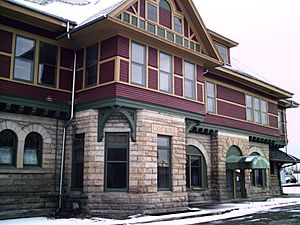 In April, 1851 the Cleveland Columbus and Cincinnati Railroad, later known as the "Big Four" and eventually the New York Central, began operating regular service between Columbus and Cleveland, stopping at Galion along the way. Prior to the end of the 19th century, Galion became a division headquarters for the line.

Galion boasted two large railroad depots, the Big Four Depot on Washington Street, and the Erie Depot on South Market Street, which was privately purchased and moved to the west side of Crestline, Ohio and is used as the main office of an auto wrecking yard. With the move of the Erie yards to Marion in the 1910s, the railroads declined, although the city remained a passenger rail center into the 1960s. The Big Four Depot was abandoned; however, it has since been acquired by the City of Galion and is undergoing a slow but thorough restoration.

From 1915 to 1923, Galion was on the original route of the Lincoln Highway, America's first coast-to-coast route. In later years, however, the northern route was improved and became US 30 North, although until approximately 1970 the route through Galion was designated as US 30 South. The new, four-lane US 30 opened in 2005, and passes just north of town, giving the community excellent transportation access.

State routes in Galion include 309, which connects Marion to the southwest with Ontario to the east; 598, which originates in Galion and stretches northward; 19, which heads westward toward the county seat and also south toward Williamsport; 61, which goes south towards Morrow and Delaware Counties and north to Lake Erie, and 97, which goes east through Lexington.

All content from Kiddle encyclopedia articles (including the article images and facts) can be freely used under Attribution-ShareAlike license, unless stated otherwise. Cite this article:
Galion, Ohio Facts for Kids. Kiddle Encyclopedia.