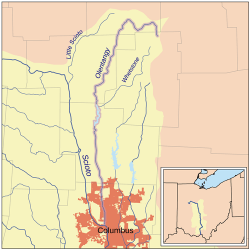 Map of Olentangy River highlighted within the Scioto River watershed

The Olentangy River is a 97-mile-long (156 km) tributary of the Scioto River in Ohio, United States.

It was originally called keenhongsheconsepung, a Delaware word literally translated as "sharp tool river", based on the shale found along its shores. Early settlers to the region translated this into "Whetstone River". In 1833, the Ohio General Assembly passed legislation intending to restore the original Native American names to some Ohio waterways, but mistakenly gave Whetstone River the name "Olentangy"—Delaware for "river of the red face paint"—which had actually belonged to what is now known as Big Darby Creek. 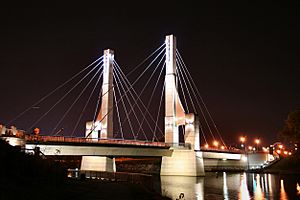 The Olentangy River rises in Morrow County approximately 2 mi (3.2 km) southeast of Galion, near Blooming Grove, flowing through Galion and northwest towards Bucyrus, where it then turns south and flows through Eastern Marion County, Ohio (where it is still locally known as the Whetstone River) before flowing south into Delaware County. The river continues southward towards the communities of Delaware, Powell, Worthington, and the village of Riverlea, before reaching Columbus and the campus of Ohio State University, before joining with the Scioto River in downtown Columbus.

The Delaware State Park Reservoir, also known as Delaware Lake, was constructed along the Olentangy River in 1951. The reservoir is located 5 miles north of the city of Delaware, and was built by the U.S. Army Corps of Engineers for flood control purposes. On January 13, 2005, Delaware Dam was nearly overtopped. The water level came within less than 1 foot of the top of the dam, requiring the main spill gates to be opened before it began dropping.

Twenty-two miles of the Olentangy have been designated a State Scenic River by the Ohio Department of Natural Resources, Division of Natural Areas & Preserves.

In 2012 the Ohio EPA and the City of Columbus began to remove some of the lowhead dams that cross the river. Work started with removing the 5th Avenue Dam. The river is now about half of its former width. Work continues to restore the banks and clean the area.

Broadcaster Keith Jackson would introduce Ohio State football games "from the banks of the mighty Olentangy."

All content from Kiddle encyclopedia articles (including the article images and facts) can be freely used under Attribution-ShareAlike license, unless stated otherwise. Cite this article:
Olentangy River Facts for Kids. Kiddle Encyclopedia.