Bucyrus ( bew-SY-rəs) is a city in the U.S. state of Ohio and the county seat of Crawford County, located in northern Ohio approximately 28 miles (45 km) west of Mansfield and 66 miles (106 km) southeast of Toledo. The population was 12,362 at the 2010 census. The city is the largest in Crawford County, and the center of the Bucyrus Micropolitan Statistical Area (as defined by the United States Census Bureau in 2003). 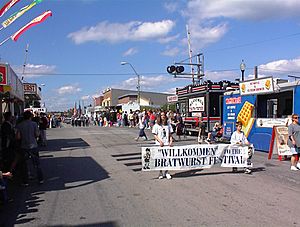 The Bucyrus Foundry and Manufacturing Company, a predecessor to Bucyrus International, Inc. was founded in Bucyrus in 1880. The company moved to Wisconsin in 1893.

Bucyrus was once home to the Dostal Brothers Brewery. Founded in 1902, the brewery was run by John M. and George A. Dostal.

The Lincoln Highway, later US Route 30, was routed through the city along Mansfield Street in 1913. In 1971 a modern, limited-access bypass was built to the north, but the associated freeway links to the east and west of Bucyrus, replacing the old two-lane Lincoln Highway route, were not completed until 2005, nearly 35 years after they were first proposed.

On March 10, 2007, Bucyrus was featured as the town of the week on the nationally syndicated Public Radio International program, Whad'Ya Know?.

Bucyrus, which calls itself "the Bratwurst Capital of America", is home to the Bucyrus Bratwurst Festival, held annually during the third weekend in August. It includes musical performances and a beauty pageant.

The city's public library is housed in its original Carnegie library building.

All content from Kiddle encyclopedia articles (including the article images and facts) can be freely used under Attribution-ShareAlike license, unless stated otherwise. Cite this article:
Bucyrus, Ohio Facts for Kids. Kiddle Encyclopedia.