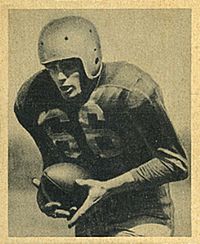 Cecil Belvedire Souders (January 3, 1921 – August 30, 2021) was an American football player. He played professional in the National Football League (NFL) for the Detroit Lions. He was born in Bucyrus, Ohio. Souders played college football at Ohio State University. He was drafted in the 25th round of the 1945 NFL Draft by the Washington Redskins.

All content from Kiddle encyclopedia articles (including the article images and facts) can be freely used under Attribution-ShareAlike license, unless stated otherwise. Cite this article:
Cecil Souders Facts for Kids. Kiddle Encyclopedia.