The university was started in 1870 in a farming group in Columbus, Ohio. The first class had only 24 students. In the 1880s, Ohio State started taking graduate students. They started the law school in 1891. Later, Ohio State added colleges of medicine, dentistry, commerce, and journalism. In 1906, Ohio made a law that said Ohio State University was the state's "flagship campus", or the best school in the state of Ohio.

The school was also ranked as the 24th best university in the US, 10th top public university, and top school in Ohio by Arizona State University. The Washington Monthly college rankings placed Ohio State as the 12th best in the country and 10th best public university.

Ohio State’s faculty includes a Nobel Prize-winning physicist, Kenneth G. Wilson. It has twenty-one members of the United States National Academy of Sciences or National Academy of Engineering, plus four members of the Institute of Medicine. There are also 159 elected fellows of the American Association for the Advancement of Science who are teaching at Ohio State. In the last 25 years, thirty-two Ohio State faculty members have been given the Guggenheim Fellowship, which is more than all other public and private Ohio universities combined.

Ohio State is using over $110 million to research important issues, such as research to find a cure for cancer, renewable energy sources, and sustainable drinking water supplies. 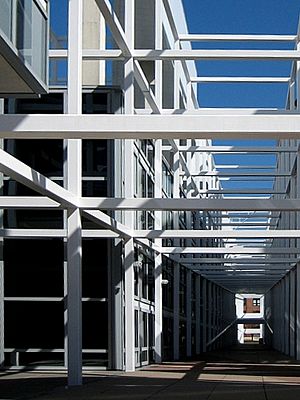 Wexner Center for the Arts

Ohio State's main urban campus is in Columbus. It has a size of 1755 acres, and it is about 2.5 miles (4.0 km) north of the city's downtown. Four buildings are currently listed on the National Register of Historic Places: Enarson Hall, Hayes Hall, Ohio Stadium, and Orton Hall. Architecture on the Ohio State campus is a mix of traditional, modern, and post-modern styles.

The William Oxley Thompson Memorial Library is located at the west end of The Oval. It is the Ohio State library's main branch, and it is the largest of the school's branches. The school's library system has twenty-one libraries on its Columbus campus. There are eight other branches in other locations, and the system has fifty-five branches and collections in all.

The Wexner Center for the Arts is at the east end of The Oval. It was designed by the architects Peter Eisenman of New York and Richard Trott of Columbus, and it opened in 1989. The center was built mostly from a twenty-five million dollar gift from Ohio State graduate Leslie Wexner. Part of its design was to honor to the armory (military storage location) that was replaced with the Wexner Center. Its deconstructivist architecture makes known as one of the most important buildings of its generation, but the design makes it less than ideal to show many of the art displays. The main, permanent work kept in the center is Picasso's Nude on a Black Armchair, a forty-five million dollar painting that Wexner gave to Ohio State.

Ohio Union is on the east side of The Oval, and at the south side is another, smaller grassy area known as The South Oval. The west side is contains Browning Amphitheatre and Mirror Lake.

The Ohio State College of Medicine is on the southern edge of the central campus. It is home to the James Cancer Hospital, where cancer is studied. It is one of the National Cancer Institute's forty-one NCI-designated Cancer Centers.

The university also has several regional campuses and research facilities in Lima, Mansfield, Marion, and Newark. The school also has an Ohio State Agricultural Technical Institute. The first regional campus was in Newark, which was founded in 1957. Students there can get one of six bachelor degrees or two master degrees. In Lima, there are eight four-year programs, 2 high school completion programs, and four graduate programs. The Mansfield campus is in the Allegheny Plateau area, and it has 7 bachelor programs and 3 master programs. Marion's campus is closest to Columbus, and it has 5 bachelor programs and 2 master programs.

The Office of Student Life helps students with things such as student housing; food service; health, wellness and counseling; activities, organizations and leadership development; recreation and intramurals. The Office of Student Life also operates the Schottenstein Center, the Fawcett Center, the Blackwell Inn, the Ohio Union, the Drake Union, and the Wilce Student Health Center.

Ohio State has several student-managed publications and media outlets. The Makio is the official yearbook.The Lantern is the school's daily newspaper. Mosaic is a literary magazine published by Ohio State, which features undergraduate fiction, poetry, and art. OHIO.FM is the student-run radio station with an Internet audio stream (no broadcast signals are available in Columbus). Students also operate a local cable channel known as Buckeye TV, which airs mostly in the campus housing.

Ohio State University Marching Band is an old tradition at Ohio State. The marching band is the largest all-brass and percussion band in the world. The traditional school songs are arranged to fit this unique instrumentation. The band is famous for "Script Ohio", where band members use their bodies to spell Ohio spelled in script on the football field. It is seen as an honor to dot the "i" in the word. Celebrities such as Bob Hope, Jack Nicklaus, and John Glenn have dotted the "i".

Ohio State is in the NCAA's Division I. Ohio State's mascot is "Brutus the Buckeye". The school colors are scarlet and gray. Most Ohio State teams play in the Big Ten Conference. The women's ice hockey team plays in the Western Collegiate Hockey Association. In lacrosse, the men's team plays in ECAC Lacrosse and the women's team in the American Lacrosse Conference, but both will leave their respective leagues after the 2014 season, as the Big Ten will start lacrosse leagues for both sexes in the 2014–15 school year.

All content from Kiddle encyclopedia articles (including the article images and facts) can be freely used under Attribution-ShareAlike license, unless stated otherwise. Cite this article:
Ohio State University Facts for Kids. Kiddle Encyclopedia.