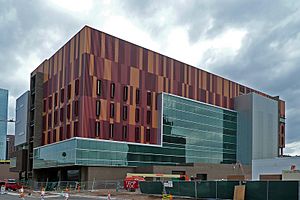 Walter Cronkite School of Journalism Building on the campus of Arizona State University.

The sports teams of the university are called the Sun Devils. ASU has 20 varsity teams, almost all of which compete in the Pacific-12 Conference.

All content from Kiddle encyclopedia articles (including the article images and facts) can be freely used under Attribution-ShareAlike license, unless stated otherwise. Cite this article:
Arizona State University Facts for Kids. Kiddle Encyclopedia.