St. George's (formally known as the Town of St. George, or St. George's Town) is part of UNESCO World Heritage Sites. First settlers were there since 1612. It is the first permanent English settlement on the islands of Bermuda. It is is usually described as the third successful British settlement in the Americas. It is the oldest British town in the New World where people continue to live up to this day.

In the Bermudian convention where the name of the place has the name of a person, it sets the person's name in the possessive form. The place is rarely treated as equivalent to the person.

By example, Bermudians will always say St. George's and St. David's are the largest islands in St. George's Parish. It is never St. George and St. David are the largest islands in St. George Parish. As many maps and other printed materials featuring Bermuda are produced abroad, it is extremely common to find maps, books and other material using the non-possessive forms. However, visitors to Bermuda should be aware that using the non-possessive forms when speaking to Bermudians is likely to cause as much offence as saying "Bermudan". 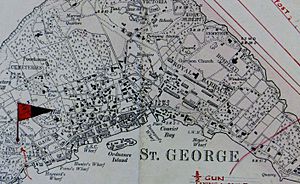 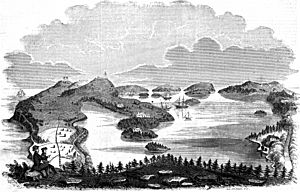 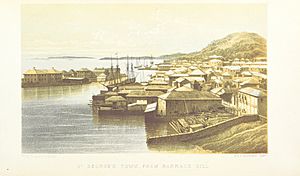 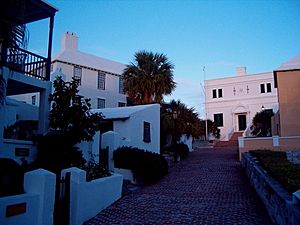 The State House, the home of Bermuda's parliament in St. George's from 1620 until the capital's relocation to Hamilton in 1815. 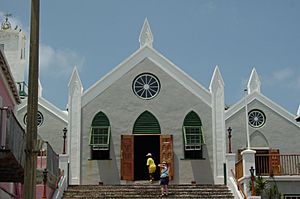 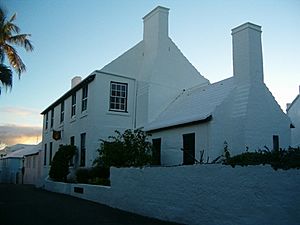 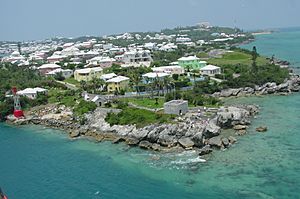 A view of St. George's from the Norwegian Majesty cruise ship leaving the island

Originally called New London, St. George's was first settled in 1612. This was three years after the first English settlers landed on St. George's Island on their way to Virginia. Led by Admiral Sir George Somers and Lieutenant-General Sir Thomas Gates, they had deliberately steered their ship, Sea Venture, to a reef to escape a storm. The survivors built two new ships, the Deliverance and Patience, and most continued their voyage to Jamestown, but the Virginia Company laid claim to the island.

This small town was the capital of Bermuda until 1815. It was linked to the history of colonial America. Ten thousand Bermudians moved to Virginia and the American Southeast. This was before United States independence made them citizens of separate nations. Branches of wealthy Bermudian merchant families ruled the trade in the area's ports.

As Bermuda's population centre, St. George's was connected to the development in the North American colonies. During the American War of Independence, and as requested by George Washington, Bermudians assisted the American rebels in stealing much-needed gunpowder from a St. George's magazine. It supplied the forts protecting that were protecting the port.

In 1996, the town was twinned with Lyme Regis, Dorset, England. It was the birthplace of Admiral Sir George Somers. In 2000, the town, together with numerous surrounding fortifications, including the Castle Islands Fortifications, they were added to the UNESCO World Heritage Site. Together, they are formally known as the Historic Town of St George and Related Fortifications.

St. George's Colts and Hamilton Parish football clubs play their games at the Wellington Oval, which also serves as a cricket ground.

All content from Kiddle encyclopedia articles (including the article images and facts) can be freely used under Attribution-ShareAlike license, unless stated otherwise. Cite this article:
St. George's, Bermuda Facts for Kids. Kiddle Encyclopedia.