The World Golf Hall of Fame is located at World Golf Village near St. Augustine, Florida, in the United States, and it is unusual among sports halls of fame in that a single site honors both men and women. It is supported by a consortium of 26 golf organizations from all over the world.

The Hall of Fame Museum Building was designed by the specialist museum architecture firm E. Verner Johnson and Associates of Boston. They also produced the museum master plan that established the size, mission and qualities of the museum and the surrounding facilities and site.

The Hall of Fame Museum features a permanent exhibition and a rolling program of temporary exhibitions. Designed by museum design firm Ralph Appelbaum Associates, the Hall of Fame and exhibition area contains exhibits on the game's history, heritage, and techniques; major players and organizations; golf course design, equipment, and dress; and new directions, such as ecological concerns in course management.

The World Golf Hall of Fame was originally located in Pinehurst, North Carolina, and was privately operated by Diamondhead Corp., then owners of the Pinehurst Resort. It opened in September 1974 with an initial class of 13 members. Initially it was a local project, but the PGA of America took over management in 1983 and acquired full ownership in 1986.

In 1994 the global golf industry established a non-profit making body called the World Golf Foundation to promote the sport, with the creation of an enhanced Hall of Fame as one of its main objectives. Construction at the new site in St. Johns County began in 1996 and the new facility opened on May 19, 1998. 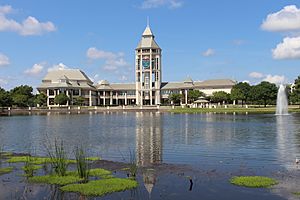 In October 2013, the Hall announced that it was reviewing its selection process and that there would be no induction ceremony in 2014. A new process was announced in March 2014.

Starting in 2014, members are inducted into the Hall of Fame in one of four categories: Male Competitor, Female Competitor, Veterans, and Lifetime Achievement categories. Elections are held every other year with induction ceremonies in odd number years beginning in 2015. The process has changed from that used from 1996 to 2013. The minimum qualifications for male and female competitors are: minimum of 40 years old, or five years removed from "active competition" and 15 or more wins on "approved tours" or two "major wins". The veterans category is primarily for those golfers whose careers ended before 1980 and includes both amateurs and professionals. The lifetime achievement category remains from the old system.

A 20-member selection sub-committee will choose from among the eligible candidates and select ballots for a selection committee. There will be five names each on the male and female ballots and three names each on the veterans and lifetime achievement ballots. A separate 16-member selection committee will then vote on all four ballots. Election to the Hall of Fame will require 75% of the vote and each year's election class is limited to two from each ballot and five total.

From 1996 to 2013, members were inducted into the Hall of Fame in one of five categories: PGA Tour/Champions Tour, LPGA Tour, International, Lifetime Achievement, and Veterans.

Current and former PGA Tour and Champions Tour players were eligible for this ballot if they met the following requirements (beginning with 1996 election):

LPGA Tour golfers were eligible through a point system. Since 1999, LPGA members automatically qualified for World Golf Hall of Fame membership when they meet these three criteria:

This point system is still used for selection to the LPGA Hall of Fame.

Men and women golfers not fully eligible for PGA/Champions Tour ballot or the LPGA Tour point system were eligible for the International ballot if they met the following requirements (beginning with the 1996 election):

There was also a "lifetime achievement" category through which anyone who had made a major contribution to the organization or promotion of the sport may be selected, for example, Bob Hope. These members were chosen by the Hall of Fame's Board of Directors. Most played golf, in some cases with some competitive success, but it was not their play alone which won them a place in the Hall of Fame.

The last category was created to honor professional or amateur players whose career concluded at least 30 years ago. These members were also chosen by the Hall of Fame's Board of Directors.

New members are inducted each year on the Monday before The Players Championship (previous to 2010 in October or November), and by May 2013 there were 146 members. Beginning in 2010, the ballots are due in July with the results announced later in the year. New entrants in the Lifetime Achievement and Veteran's categories are announced at irregular intervals. For example, Frank Chirkinian was elected in the Lifetime Achievement category in an emergency election in February 2011, with the vote presumably held because he was then terminally ill with lung cancer; when it became clear he would not live to attend his induction, he videotaped his acceptance speech in late February, less than two weeks before his death.

All content from Kiddle encyclopedia articles (including the article images and facts) can be freely used under Attribution-ShareAlike license, unless stated otherwise. Cite this article:
World Golf Hall of Fame Facts for Kids. Kiddle Encyclopedia.