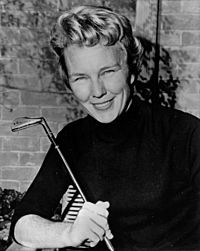 Mary Kathryn "Mickey" Wright (February 14, 1935 – February 17, 2020) was an American professional golfer. She played on the LPGA Tour. She became a member of the tour in 1955 and won 82 LPGA Tour career events. Of her 13 major championships, four were U.S. Women's Opens. She was a member of the World Golf Hall of Fame.

All content from Kiddle encyclopedia articles (including the article images and facts) can be freely used under Attribution-ShareAlike license, unless stated otherwise. Cite this article:
Mickey Wright Facts for Kids. Kiddle Encyclopedia.