Jack William Nicklaus (born January 21, 1940 in Columbus, Ohio), also known as "The Golden Bear", was a major force in professional golf from the 1960s to the mid 1990s, and is regarded by many as the greatest golfer of all time.

Together with Arnold Palmer, he is credited with turning golf into the major spectator sport it has become. While Palmer brought golf into the TV era, it was the developing Nicklaus-Palmer rivalry that drove subsequent interest. 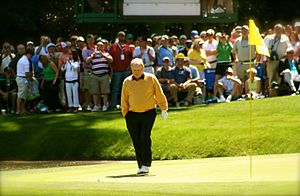 Nicklaus took up golf at the age of ten, shooting 51 for his first nine holes. He won the first of six Ohio State Junior titles at the age of twelve. While attending Ohio State University he won the U.S. Amateur title twice (1959, 1961) and an NCAA Championship (1961).

In 1978, he received Sports Illustrated magazine's "Sportsman of the Year" award, 1980 he was awarded the BBC Sports Personality of the Year Overseas Personality Award. Jack Nicklaus had an unusual combination of being one of the greatest putters of all time as well as the longest hitter on the tour during his prime. 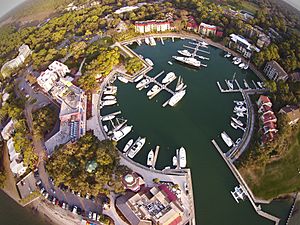 Nicklaus devotes much of his time to golf course design and operates one of the largest golf design practices in the world. Nicklaus considered golf course design another facet of the game that kept him involved and offered a challenge. His first design, Harbour Town Golf Links was opened for play in 1969. For the first few years, all of his projects were co-designs with either Pete Dye or Desmond Muirhead, who were two of the leading golf course architects of that era.

His first solo design, Glen Abbey Golf Course in Oakville, Ontario, opened for play in 1976. The oldest golf club in the U.S, Saint Andrew's Golf Club in New York, was redesigned by Nicklaus in 1983.

Nicklaus is in partnership with his four sons and his son-in-law through their company, Nicklaus Design. The company had 299 courses open for play at the end of 2005, which was nearly 1% of all the courses in the world (In 2005 Golf Digest calculated that there were nearly 32,000 golf courses in the world, approximately half of them in the United States.) 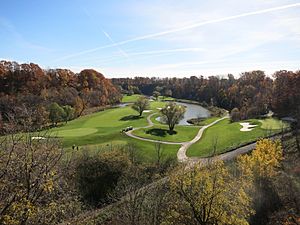 While the majority of Nicklaus-designed courses are located in the United States, the company has designed golf courses in Asia, Australia, Canada, Europe, and Mexico. For 2009, Nicklaus Design had 12 courses in Golf Digest's "75 Best Golf Resorts in North America".

Nicklaus has also written golf instructional columns for Golf Magazine and for Golf Digest magazine, with which he is currently associated. He also appeared as a television analyst and commentator with ABC Sports on golf broadcasts.

Between 1988 and 1998, Nicklaus also gave his name to promote the successful Jack Nicklaus Golf computer game series developed by Accolade. Several of the golf courses he designed were incorporated into the fourth incarnation of the game Jack Nicklaus 4 published in 1997. In addition, Jack Nicklaus 6: Golden Bear Challenge by Activision was published in 1999. 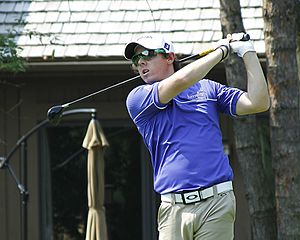 Nicklaus continues to manage the Memorial Tournament, which he created in his home state of Ohio. The event is played at Muirfield Village, a course that he co-designed with Desmond Muirhead and opened in 1974. The course was officially dedicated on Memorial Day, May 27, 1974, with an exhibition match between Nicklaus and Tom Weiskopf.

Nicklaus and wife Barbara serve as honorary chairman and active chairwoman of the Nicklaus Children's Health Care Foundation in North Palm Beach, Florida which provides valuable programs and services to more than 4,000 hospitalized children and their families, free of charge, through Child Life programs, the Pediatric Oncology Support Team, and the Safe Kids program. 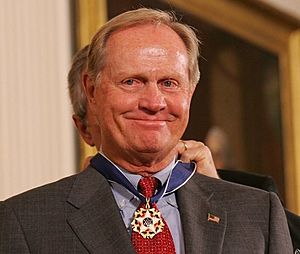 Nicklaus received the PGA Tour Rookie of the Year award. As well as receiving the PGA Tour Player of the Year five times, he has also attained the Bob Jones Award and the Payne Stewart Award, among others.

Nicklaus was inducted into the World Golf Hall of Fame in the inaugural class of 1974 and the Canadian Golf Hall of Fame in 1995. His likeness was featured on a special commemorative issue five-pound note issued by the Royal Bank of Scotland, making him the first living person outside the Royal Family to appear on a British banknote.

In 2001, Nicklaus was honored with the "Lombardi Award of Excellence" from the Vince Lombardi Cancer Foundation. The award was created to honor Coach Lombardi's legacy, and is awarded annually to an individual who exemplifies the spirit of the Coach.

There is a Jack Nicklaus Museum on the campus of The Ohio State University in his home town of Columbus, Ohio. The museum was opened in 2002 and is a state-of-the-art, facility offering a comprehensive view of Nicklaus' life and career in and out of golf as well as exhibits celebrating the history and legends of the game. 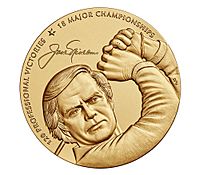 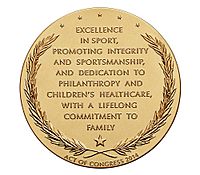 Nicklaus, is atop Golf Inc. magazine's coveted list of the "Most Powerful People in Golf" for a record-extending sixth consecutive year. He is the only golf industry figure who has ever been named to the No. 1 spot for more than three years. Nicklaus topped the 2009 worldwide list of 35 individuals who were selected by a panel of editors for their ability to influence and impact the business of golf, be it the development of courses and communities, the operation of courses, the equipment used by golfers, or the rules and regulations of the game.

On May 19, 2014, the United States House of Representatives voted to pass H.R. 2203, a bill that would award Nicklaus the Congressional Gold Medal "in recognition of his service to the nation in promoting excellence and good sportsmanship." The bill says that Nicklaus' "magnetic personality and unfailing sense of kindness and thoughtfulness have endeared him to millions throughout the world."

All content from Kiddle encyclopedia articles (including the article images and facts) can be freely used under Attribution-ShareAlike license, unless stated otherwise. Cite this article:
Jack Nicklaus Facts for Kids. Kiddle Encyclopedia.