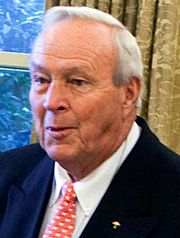 Arnold Daniel Palmer (September 10, 1929, Latrobe, Pennsylvania – September 25, 2016) was an American professional golfer. He won many events in PGA and Champions Tours dating back to 1955. These included winning the Masters Tournament, the U.S. Open, and The Open Championship.

Palmer died at a hospital in Pittsburgh, Pennsylvania on September 25, 2016, aged 87. He died from complications of heart problems while awaiting for heart surgery.

All content from Kiddle encyclopedia articles (including the article images and facts) can be freely used under Attribution-ShareAlike license, unless stated otherwise. Cite this article:
Arnold Palmer Facts for Kids. Kiddle Encyclopedia.