Zenos Frudakis (born July 7, 1951), known as Frudakis, is an American sculptor whose diverse body of work includes monuments, memorials, portrait busts and statues of living and historic individuals, military subjects, sports figures and animal sculpture. Over the past four decades he has sculpted monumental works and over 100 figurative sculptures included within public and private collections throughout the United States and internationally. Frudakis currently lives and works near Philadelphia, Pennsylvania, and is best known for his Freedom sculpture, which shows a series of figures breaking free from a wall and is installed in downtown Philadelphia. Other notable works are at Arlington National Cemetery in Virginia, Brookgreen Gardens in South Carolina, the National Academy of Design, and the Lotos Club of New York City, the Imperial War Museum in England, the Utsukushi ga-hara Open Air Museum in Japan, and the U.S. Embassy in Pretoria, South Africa.

Born in 1951 in San Francisco, California, Frudakis is the oldest of five children. He was born to Greek-American parents, and was raised primarily in Northwestern Indiana, with the exception of several years in Wheeling, West Virginia. As a child, Frudakis first began to sculpt under the family's kitchen table with a piece of dough given to him by his mother as she was preparing to bake bread. Growing up in Greek family culture, Frudakis began drawing and reading at a young age, initiating a lifelong discipline of studying and creating art each day. Artistic inspirations come from ancient Greeks, and sculptors Michelangelo, Bernini, Carpeaux and Rodin. Throughout his life, Frudakis has been an avid reader with a wide range of interests that inform his work.

Frudakis' initial years in college were close to home in the Gary, Indiana area due to illness of his father. During this time, he spent summers working in steel mills, and in 1970 to 1971, attended Indiana University Northwest Extension.

In 1972, Frudakis moved to Philadelphia to study at the Pennsylvania Academy of the Fine Arts. Concurrently, he also studied sculpture privately with Prix de Rome winner Evangelos Frudakis, his elder brother. Frudakis studied painting privately with Prix de Rome winner James Hanes. From 1977 to 1983, he attended the University of Pennsylvania, where Frudakis earned bachelor's and master's degrees in Fine Arts.

Frudakis continued sculpting commissions with an emphasis on the figure and the portrait, as demonstrated in his many monumental works, individual portrait statues and busts, and bas-reliefs. He created sculptures of living and historic individuals that express the character and vitality of his subjects while capturing an accurate likeness. Portrait statues included notable figures, such as businessman and philanthropist John D. MacArthur, installed in Palm Beach Gardens, Florida; Honorable Dame Lois Browne-Evans, the first female Bermudian justice, installed in the Dame Lois Browne Evans Building, Hamilton, Bermuda; landscape architect, journalist and public administrator Frederick Law Olmsted, installed at The North Carolina Arboretum, Asheville, North Carolina; and lawyer Clarence Darrow on view at the Rhea County Courthouse in Dayton, Tennessee. 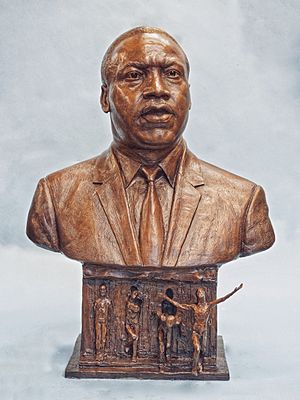 Some of Frudakis's sculptures have generated controversy. When he sculpted a life-size bronze bust of Dr. Martin Luther King Jr. for the U.S. Embassy in Pretoria, South Africa, apartheid was still in effect there. The U.S. government had advised Frudakis he could be jailed for bringing the sculpture into South Africa, so the bust was brought into the country in 1989 by diplomatic pouch. The sculpture was installed just inside the embassy's fence, visible to the public but outside the South African government's reach, standing as a statement of the U.S.’s opposition to apartheid.

Frudakis' statue of attorney Clarence Darrow reawakened tensions between local evolutionists and creationists when it was installed outside the Rhea County Courthouse in Dayton, Tennessee, in 2017. The courthouse was the site of the 1925 Scopes "monkey trial," in which John T. Scopes was accused of unlawful teaching of human evolution in a state-funded school. Darrow represented Scopes, while William Jennings Bryan argued for the prosecution. Since 2005, a sculpture of Bryan has been on display on the courthouse lawn. The Darrow sculpture was commissioned by the Freedom From Religion Foundation and installed on the lawn in balance to the Bryan sculpture, where it drew criticism from some residents who oppose to the teaching of evolution in Tennessee schools.

Frudakis has been commissioned to create bronze portrait busts, statues, and monuments of significant figures from the sports world, including golf, baseball, hockey and boxing.

A celebratory pose of Payne Stewart, with a leg in the air and a fist thrust to the sky, is commemorated in Frudakis' bronze statue displayed at Pinehurst Resort, North Carolina, near the spot where Stewart, in 1999, made this gesture when winning the U.S. Open. The sculpture was unveiled at Pinehurst in 2001. In 2014, when Pinehurst once again hosted the U.S. Open, on the 15th anniversary of Stewart's win, attendees posed alongside the sculpture, mimicking the iconic pose. Thousands of television and online viewers saw these images; Payne's daughter Chelsea was photographed with her father's sculpture and the PGA Tour called it on Instagram, "The coolest statue photo you’ll see this week." Payne Stewart's tribute trophy case at Pinehurst Resort also showcases Frudakis' portrait bust of Payne Stewart along with historic photos and memorabilia. 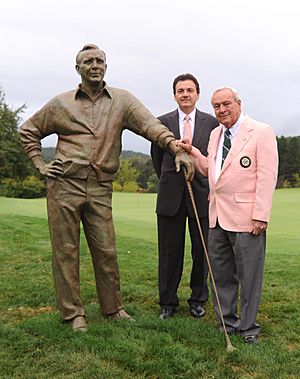 Frudakis’ larger-than-life sculptures include Baseball Hall of Famers Mike Schmidt, Steve Carlton, Richie Ashburn and Robin Roberts, all on view at Citizens Bank Park, Philadelphia, Pennsylvania. A relief sculpture of Coach Staffieri is at University of Pennsylvania's Franklin Field. A public monument at the DiMaggio Children's Hospital, Hollywood, Florida, shows Joe DiMaggio kneeling to speak to a young boy, and includes the inscription, "We never stand so tall as when we stoop to help a child."

Jimmy Braddock, grandson of James, said, "This statue is a reminder of the power of the human spirit to overcome adversity through determination."

The 8-foot bronze statue honoring Palm Beach Gardens’ city founder John D. MacArthur is mounted on a 3-foot base of granite from a quarry in Vermont. Unveiled on November 21, 2010 as part of the city's 50th anniversary celebration, the sculpture is installed at the city hall entrance on Military Trail. 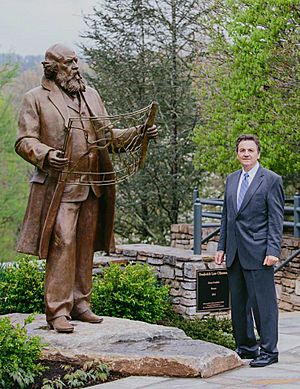 Commissioned by The North Carolina Arboretum, the first larger-than-life-size sculpture of Frederick Law Olmsted is a tribute to the man known as the father of American landscape architecture. It was unveiled at a ceremony on April 22, 2016 at the Arboretum in Asheville, North Carolina. The Olmsted sculpture is sited on a large natural stone in the Arboretum's Blue Ridge Court with a view of the Pisgah National Forest behind it. Frudakis said, "It was important for me to create a sculpture that embodied the idea of Frederick Law Olmsted as a visionary of monumental proportions. In his hands he holds the abstract topographic map, which came from his mind and became the land that he stood on."

The memorial sculpture of Nina Simone depicts the "High Priestess of Soul" seated atop a stone base while performing on a floating keyboard. The keyboard is sculpted in the form of a wave—evoking the sense of grace, rhythm and music. Simone's daughter and Broadway actress Lisa Simone Kelly posed for Frudakis as he sculpted the eight-foot bronze portrait statue. The memorial of the world-renowned singer and human rights activist includes her ashes within a sculpted heart that is welded to the interior of the figure's chest.

The Nina Simone sculpture was dedicated on February 16, 2017, which would have been Simone's 77th birthday. The memorial is in Nina Simone Plaza in her birthplace of Tryon, North Carolina.

The larger-than-life Molly Maguires Memorial depicts the defining moment in the group's history, The Day of the Rope (June 21, 1877), during which ten victims of the Molly era lost their lives. All were represented by a single hooded figure on a scaffold the moment before hanging. The emotional impact of the sculpture provokes a reconsideration of history. A cast of this sculpture is in the collection of the State Museum of Pennsylvania, Harrisburg, Pennsylvania. 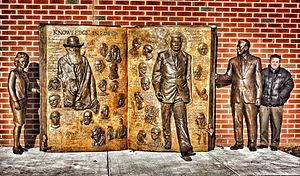 Using Francis Bacon's quote, "Knowledge is Power" as the central theme, Frudakis sculpted this monument to inspire the process and pleasure of learning. Using the visual metaphor of an open book, the 8-ft high by 12-ft wide sculpture features Charles Darwin and Albert Einstein emerging from its pages. These influential figures represent key shifts in the understanding of the world and its sciences. Relief faces and quotes from 31 iconic figures in science, history, mathematics and the arts portray contrasting theories, philosophies and politics, as well as struggles shared across generations. On the left page, a large relief portrait of Charles Darwin is encircled by early thinkers, artists, activists, politicians and scientists along with their famous ideas or works. On the right page, Albert Einstein steps out dimensionally as did his ideas about space and time, and he is surrounded by more contemporary figures, concepts and quotations. The viewer is led through a process of exploration and is left to weigh countering viewpoints and discover their personal resonance.

Installed in 2014, the sculpture is located at the entrance to James Hall at Rowan University in Glassboro, New Jersey.

The United States Air Force Memorial Honor Guard, a 16-ft high monument, consists of four eight-foot bronze figures, patinaed in blue-gray, standing side by side and mounted on a ten-by-two-foot bronze base. The two middle figures are flag bearers, carrying the United States and Air Force flags and battle streamers, flanked by two rifle guards. The Honor Guard soldiers depicted in the Air Force Memorial are, from left to right, a Caucasian man, an African American man, a Latino man and a Caucasian woman. The sculpture stands before the granite inscription wall bearing the names of U.S. Air Force recipients of the Medal of Honor. The facing south wall is inscribed with Air Force core-value quotations: "Integrity first, service before self, and excellence in all we do." The monument stands adjacent to the memorial's three stainless-steel spires created by James Ingo Freed that soar above the statues. The memorial is located near The Pentagon and Arlington National Cemetery in Arlington, Virginia.

The design of the sculpture was initially more sketch-like but as it progressed became more detailed with precise measurements for positioning of clothing, ties, medals, buttons, shoes, straps, belts, accessories, flags and rifles, following the strict guidelines of the Honor Guard. (This approach was in complete contrast to another sculpture Frudakis was working on concurrently known as Freedom.)

The Air Force Memorial's dedication ceremony in 2006 was attended by approximately 30,000 people, and it began the service's 60th Anniversary Commemoration, "From Heritage to Horizons—Commemorating 60 Years of Air and Space Power."

The Freedom sculpture in Philadelphia, PA with sculptor Zenos Frudakis.

Freedom is the most widely recognized public sculpture by Frudakis. Installed in downtown Philadelphia, Pennsylvania, at 20 ft. long by 8 ft. high and 7,000 lbs., the monument portrays transformation through the sequential emergence of a figure in four stages of breaking free from a wall.

Influenced by Rodin's Gates of Hell, Frudakis includes many smaller sculptures and personal elements within the monument's wall. The bronze's maquette, the sculptor's hand and sculpture tools are cast into the wall. The anatomical man as well as portraits, figures and reliefs are shown partially sculpted, revealing the process of creation.

The back surface of the sculpture's wall (not visible in the current installation) includes additional elements that Frudakis calls the "Other Side of Freedom." It consists of mummified forms in a tomb-like structure that evolved as Frudakis was creating the monument. 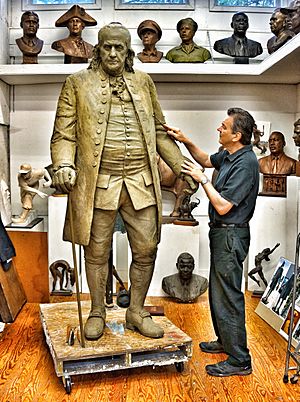 In a career spanning over four decades, Frudakis has produced monumental figures such as the United States Air Force Memorial Honor Guard Installed at the Arlington National Cemetery, and Freedom in Philadelphia, Pennsylvania 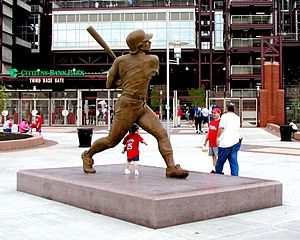 All content from Kiddle encyclopedia articles (including the article images and facts) can be freely used under Attribution-ShareAlike license, unless stated otherwise. Cite this article:
Zenos Frudakis Facts for Kids. Kiddle Encyclopedia.