Dayton is a city and county seat in Rhea County, Tennessee, United States. As of the 2010 census, the city population was 7,191. The Dayton Urban Cluster, which includes developed areas adjacent to the city and extends south to Graysville, had 10,174 people in 2010.

Dayton was the site of the Scopes Trial in 1925 dealing with the creation–evolution controversy. 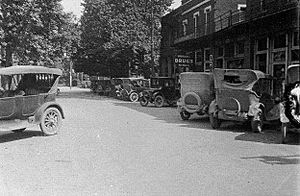 The community was originally settled circa 1820 as Smith's Crossroads. In 1877, the town was renamed Dayton, after Dayton, Ohio. The town was incorporated in 1903. Early industry included manufacture of pig iron.

In 1925, the famous Scopes Trial was held in Dayton and, for a period of time, filled the town with hucksters of every description and journalists from around the world. The participants included William Jennings Bryan in the role of prosecutor and Clarence Darrow as the principal defense counsel. The trial was over the issue of whether evolution should be taught in public schools. John T. Scopes, the defendant in the trial, was a local science teacher who was recruited by George Rappleyea to begin to teach evolution in his science class, despite it being against Tennessee law at that time. Rappleyea believed that this conflict would create an enormous amount of publicity for the town, and he was absolutely right. The town bustled with activity as people began to flock from near and far to hear the verdict on this controversial issue.

Although this trial is often represented as being pivotal in the movement to allow evolution to be taught in American schools, it actually marked the beginning of a major decline in the teaching of evolution which did not start to recover until the early 1960s. Likewise, the Butler Act, which Scopes was supposed to have violated—though it was never invoked again—remained on the books until 1967, when it was repealed by the Tennessee Legislature.

H. L. Mencken famously covered the trial for the Baltimore Sun and recruited Clarence Darrow to lead the defense team.

Immediately after the trial, Bryan continued to edit and deliver speeches, traveling hundreds of miles that week. On July 26, 1925, he drove from Chattanooga to Dayton to attend a church service, ate a meal, and died (the result of diabetes and fatigue) in his sleep that afternoon—just five days after the Scopes trial ended.

Dayton has a humid subtropical climate with four distinct seasons; hot and humid in the summer, warm and mild in spring and fall, and cool in winter with some snow.

All content from Kiddle encyclopedia articles (including the article images and facts) can be freely used under Attribution-ShareAlike license, unless stated otherwise. Cite this article:
Dayton, Tennessee Facts for Kids. Kiddle Encyclopedia.