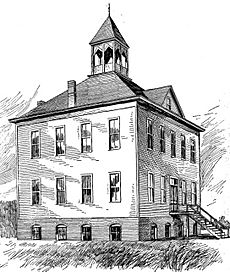 Graysville Academy, established in 1892 in Graysville, was a Seventh-day Adventist institution that was later to become Southern Adventist University.

Graysville is named for William Gray, an early settler who was appointed postmaster in 1875. The town expanded in the 1880s, when the arrival of the railroad brought coal extraction industries to the area. During this period, the Dayton Coal and Iron Company established a major operation at Graysville. Coal mined nearby was converted into coke, which in turn was used to fuel two blast furnaces to produce pig iron. This operation continued until the Great Depression brought about a general collapse in the industry in the 1930s.

According to the United States Census Bureau, the town has a total area of 0.8 square miles (2.1 km2), all of it land.

All content from Kiddle encyclopedia articles (including the article images and facts) can be freely used under Attribution-ShareAlike license, unless stated otherwise. Cite this article:
Graysville, Tennessee Facts for Kids. Kiddle Encyclopedia.