Rhea County (pronounced "ray") is a county located in the U.S. state of Tennessee. As of the 2010 census, the population was 31,809. Its county seat is Dayton.

A portion of the Trail of Tears ran through the county as part of the United States government's removal of the Cherokee in the 1830s.

During the American Civil War, Rhea County was one of the few counties in East Tennessee that was heavily sympathetic to the cause of the Confederate States of America. It was the only East Tennessee county that did not send a delegate to the pro-Union East Tennessee Convention in 1861. The county voted in favor of Tennessee's June 1861 Ordinance of Secession, 360 votes to 202. Rhea raised seven companies for the Confederate Army, compared to just one company for the Union.

Rhea had the only female cavalry company on either side during the Civil War. It was made up of young women in their teens and twenties from Rhea County and was formed in 1862. The girls named their unit the Rhea County Spartans. Until 1863, the Spartans simply visited loved ones in the military and delivered the equivalent of modern-day care packages. After Union troops entered Rhea in 1863, the Spartans may have engaged in some spying for Confederate forces. The members of the Spartans were arrested in April 1865 under orders of a Rhea County Unionist and were forced to march to the Tennessee River. From there they were transported to Chattanooga aboard the USS Chattanooga. Once in Chattanooga, Union officers realized the women were not a threat and ordered them released and returned to Rhea County. They first were required to take the oath of allegiance to the United States government. The Spartans were not an officially recognized unit of the Confederate Army.

In 1890, the county seat was moved from the Washington community to its present location in Dayton. This was a result of several causes such as the completion of the Cincinnati-Chattanooga Railroad in Smith's Crossroads, the rapid growth of Chattanooga, the detrimental affects of the American Civil War, and the emigration of its prominent citizens.

The Scopes Trial, which resulted from the teaching of evolution being banned in Tennessee public schools under the Butler Act, took place in Rhea County in 1925. The trial was one of the first to be referred to as the "Trial of the century". William Jennings Bryan played a role as prosecutor in trial, and he died in Dayton shortly after the trial ended. A statue of Bryan was recently erected on the grounds of the Rhea County Courthouse. In 1954, the laws were changed to allow teaching of evolution alongside Bible studies in school.

On March 16, 2004, Rhea County commissioner J.C. Fugate prompted a vote on a ban on homosexuals in Tennessee, allowing the county to charge them with "crimes against nature." The measure passed 8-0. Several of the commissioners who voted for the resolution chose not to run for reelection or were voted out of office. The resolution was withdrawn on March 18. In protest, a "Gay Day in Rhea" was held on May 8, 2004 with about 400 participants.

The cooling towers of Watts Bar Nuclear Generating Station, with the Tennessee River in the foreground

The major north-south road in Rhea County is U.S. Route 27. Major east-west roads include State Route 30, which intersects US-27 in Dayton, and State Route 68, which connects Spring City with Madisonville and Crossville. 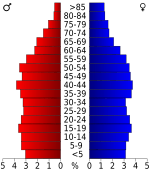 All content from Kiddle encyclopedia articles (including the article images and facts) can be freely used under Attribution-ShareAlike license, unless stated otherwise. Cite this article:
Rhea County, Tennessee Facts for Kids. Kiddle Encyclopedia.