Cleveland is a city in Bradley County, Tennessee, United States. The population was 41,285 at the 2010 census. It is the county seat and largest city in Bradley County, and the principal city of the Cleveland, Tennessee metropolitan area (consisting of Bradley County and neighboring Polk County), which is included in the Chattanooga-Cleveland-Dalton combined statistical area. Cleveland is the fourteenth largest city in Tennessee and the fifth-largest industrially with twelve Fortune 500 manufacturers. 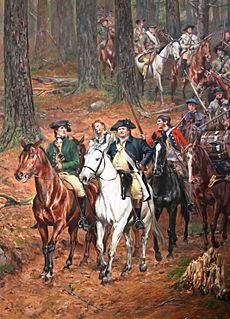 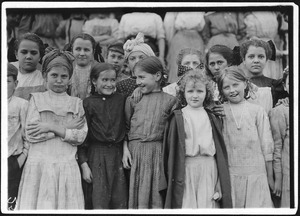 In 1819, the Cherokee Agency— the official liaison between the U.S. government and the Cherokee Nation— was moved to the Hiwassee area, a few miles north of what is now Cleveland. The Indian agent was Colonel Return J. Meigs. Charleston and Blythe's Ferry (about 15 miles, or 24 kilometers, west of Cleveland) would both figure prominently in the Cherokee Removal in the late 1830s.

The legislative act that created Bradley County in 1836 authorized the establishment of a county seat, which was to be named "Cleveland" after Colonel Benjamin Cleveland, a commander at the Battle of Kings Mountain during the American Revolution. The commissioners chose "Taylor's Place," the home of Andrew Taylor, as the location for the county seat, due largely to the site's excellent water sources. By 1838, Cleveland already had a population of 400, and was home to two churches (one Presbyterian, the other Methodist), and a school, the Oak Grove Academy. The city was incorporated on February 4, 1842, and elections for mayor and aldermen were held shortly afterward.

Cleveland grew rapidly following the arrival of the railroad in the 1850s. While bitterly divided over the issue of secession on the eve of the Civil War, Cleveland, like Bradley County and most of East Tennessee, voted against Tennessee's Ordinance of Secession in June 1861. The railroad bridge over the Hiwassee River to the north was among those destroyed by the East Tennessee bridge-burning conspiracy in November 1861. Cleveland was occupied by the Confederate Army from 1861 to 1863.

During the 1870s, Cleveland experienced a growth spurt. The city's most iconic building, Craigmiles Hall, was constructed in 1878 as an opera house and meeting hall. Numerous factories were also established, including the Hardwick Stove Company in 1879, the Cleveland Woolen Mills in 1880, and the Cleveland Chair Company in 1884. By 1890, the city was home to nine physicians, twelve attorneys, eleven general stores, fourteen grocery stores, three drug stores, three hardware stores, six butcher shops, two hatmakers, two hotels, a shoe store, and seven saloons. A mule-drawn trolley system was established in 1886, and the city had electricity by 1895. During this period, Cleveland's population more than doubled from 1,812 in 1880 to 3,643 in 1900.

Many of the buildings currently standing in the downtown area were constructed between 1880 and 1915. In 1918, the Church of God, a Christian denomination headquartered in Cleveland, established a Bible school that would eventually become Lee University. Cleveland's Chamber of Commerce was established in 1925. The city experienced further growth when several major factories were constructed in the area following World War II.

Cleveland is in the center of Bradley County situated among a series of low hills and ridges roughly 15 miles (24 km) west of the Blue Ridge Mountains and 15 miles (24 km) east of the Chickamauga Lake impoundment of the Tennessee River. The Hiwassee River, which flows down out of the mountains and forms the northern boundary of Bradley County, empties into the Tennessee a few miles northwest of Cleveland. According to the United States Census Bureau, the city had a total land area of 26.9 square miles (69.7 km2) in 2010.

Much of the city's terrain is made up of paralleling ridges, including Candies Creek Ridge (also called Clingan Ridge), Mouse Creek/Blue Springs Ridge, and Lead Mine Ridge which are extensions of the Appalachian Mountains (specifically part of the Ridge-and-Valley Appalachians) that run approximately north-northeast through the city. Several streams run in the valleys between the ridges including Candies Creek, located west of Clingan ridge, and Mouse Creek, between Mouse Creek and Lead Mine Ridge.

Location of the Cleveland Metropolitan Statistical Area in Tennessee

Cleveland is the principal city of the Cleveland Metropolitan Statistical Area, a metropolitan area that covers Bradley and Polk counties and had a combined population of 104,015 at the 2000 census. 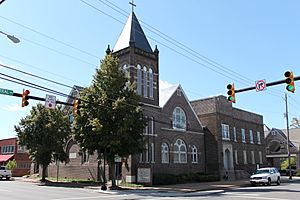 Numerous Christian denominations are represented in the city, including several for which Cleveland serves as the international headquarters. Denominations based in Cleveland include:

Several churches in Downtown Cleveland are of notable architecture, including the Romanesque Revival Broad Street United Methodist Church, the First Presbyterian Church on Ocoee Street, and St. Luke's Episcopal Church, which was built in the Gothic Revival style by architect Peter Williamson. All three are listed on the National Register of Historic Places. 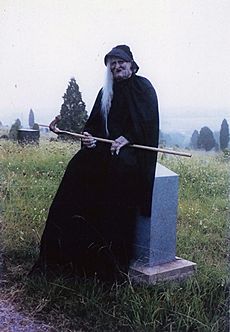 The MainStreet Cleveland Halloween Block Party draws more than 20,000 people to the city every year. The event began in 1988 as a candy handout at the Cleveland Police Department and Centenary Avenue, and has grown to one of the largest events in Cleveland, featuring live music, food stands and a costume contest. Cleveland’s mayor, Tom Rowland, has dubbed the city the “Halloween capital of the world.”

Cleveland is also famous for Tall Betsy, the official Halloween goblin of Bradley County. For years, Tall Betsy’s Halloween night appearance drew large crowds to Cleveland’s Centenary Avenue. The growing crowds inspired MainStreet Cleveland to organize the Halloween Block Party around the event. Local businessman Allan Jones created the modern legend from tales of the Tall Betsy goblin that his grandmother told him as a child. The original legend dates back to the 19th century, with print references in the Cleveland Daily Herald dating as far back as 1892. In 1998, Tall Betsy retired after drawing a crowd of over 25,000 people, but came back in 2005 to celebrate her 25th anniversary.

The Cleveland Apple Festival, begun in 2002, is an annual family event held on the third weekend of October. This festival offers a juried art and craft show, live bluegrass music, food booths, pony and a hayride, entertainment, contests and children's activities. Unlike many festivals of its kind in the U.S., The Cleveland Apple Festival does not charge for children to participate in the various children's activities provided in the children's area. The festival is a 501(c)(3) public charity.

Several public recreational parks are located within or near Cleveland. They are all maintained by the Cleveland Parks and Recreation department. They allow a variety of activities, and some organized sports teams compete at them. The Cleveland/Bradley County Greenway is an approximately 4.4 mile long greenway path which follows South Mouse Creek from downtown to neighborhoods in the northern part of the city. Other facilities include the Bradley County Park, Kenneth L. Tinsley Park, Mosby Park, Pritchard Park, Deer Park, College Hill Recreation Center, Northeast Recreation Center, Johnston Park, Leonard Fletcher Park, Cleveland Family YMCA, and the South Cleveland Community Center.

All content from Kiddle encyclopedia articles (including the article images and facts) can be freely used under Attribution-ShareAlike license, unless stated otherwise. Cite this article:
Cleveland, Tennessee Facts for Kids. Kiddle Encyclopedia.