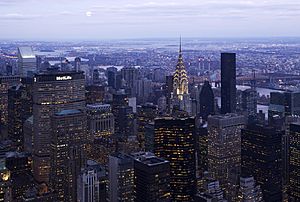 Midtown Manhattan in New York City, the largest central business district in the world. Shown is the terraced crown of the Chrysler Building lit at dawn.

A central business district (CBD) is the commercial and business centre of a city. In larger cities, the often call it the city's "financial district". It is often located at the center of the city but not always.

The city's history influences the way a CBD looks. Some cities have strong laws that forbid call buildings, to retain the character of the history and culture. This is quite common for European cities such as Paris or Vienna. In cities in the New World a single central area or downtown will often contain most of the metropolitan area's tallest buildings and act both as the CBD and the commercial and cultural city centre. Increasing urbanization in the 21st century have developed megacities, particularly in Asia, that will often have multiple CBDs scattered across the urban area.

All content from Kiddle encyclopedia articles (including the article images and facts) can be freely used under Attribution-ShareAlike license, unless stated otherwise. Cite this article:
Central business district Facts for Kids. Kiddle Encyclopedia.