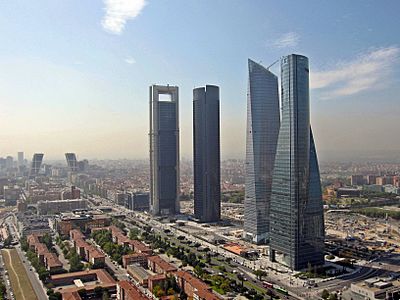 Cuatro Torres Business Area is a place in Madrid. "Cuatro Torres" is Spanish. It means "Four Towers" in English. Four skyscrapers were built here between 2006 and 2009. Each building is about 250 m tall. They are the tallest buildings in Spain.

All content from Kiddle encyclopedia articles (including the article images and facts) can be freely used under Attribution-ShareAlike license, unless stated otherwise. Cite this article:
Cuatro Torres Business Area Facts for Kids. Kiddle Encyclopedia.