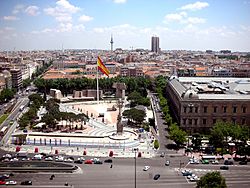 Madrid (pronounced: “mah-DRID” or /məˈdrɪd/) is the capital and largest city of Spain. The capital used to be Toledo until 1561.

Madrid is in the middle of Spain, in the Community of Madrid. The Community is a large area that includes the city as well as small towns and villages outside the city. 7 million people live in the Community. More than 3 million live in the city itself. It is the largest city of Spain and, at 655 m (2,100 ft) above sea level, the highest capital of any European country. It is the third largest city in the European Union. It has two footballs teams, Real Madrid and Atlético Madrid.

As it is the capital city, Madrid is where the monarch lives and also where the government meets.

Madrid is the financial centre of Spain. Many large businesses have their main offices there.

Although it is a modern city, a lot of its history can be seen and felt as one walks along the streets and in the large squares of the city. There are beautiful parks, famous buildings, art galleries and concert halls. The summer months are very hot and the winter months are very cold.

During the history of Spain many different people have lived there. The Phoenicians came in 1100 BC, followed by Carthaginians, Romans, Vandals, Visigoths and Moors. It was not until 1492, when the Catholic Monarchs got power, that Spain became a united country. Jews and Moors, who had lived happily there for many years, were driven away. Spain became very rich because it conquered many overseas countries, especially in Central and South America. However, Spain fought many wars and lost much of its treasure. It was very poor in 1936 when the Civil War was fought. General Franco became a harsh dictator until 1975 when Juan Carlos I was brought back to Spain and made king. There is now a democratic government.

In prehistoric times people lived in the area which is now Madrid. The Romans lived there for several centuries. The origin of today’s city really starts in the 9th century when Muhammad I had a small palace built where the Palacio Real stands today. The Moors built strong forts in Madrid in 865 and put a wall round the city. These walls stood until 1476 when they were knocked down. In 1561 Felipe I moved the royal court from Toledo to Madrid. Madrid had now become the capital of a very large empire. Over the next years and decades the Plaza Mayor was built and many great buildings and monuments, many of which still stand.

When Ferdinand II of Aragon and Queen Isabella of Castile came to Madrid, Spain had become a very rich country. The 16th and 17th centuries are now known as the “Golden Century”. Their grandson was the famous Charles I of Spain (also known as Charles V, Holy Roman Emperor). He liked his court to be in Seville. His son, Philip II (1527–1598) moved the court to Madrid in 1561.

During the dictatorship of Francisco Franco, especially during the 1960s, the south of Madrid became very industrialized, and many people from the rural areas moved to Madrid especially to the south east of the city.

When General Franco had died and democracy was restored, Madrid became more prosperous. During the 1980s and 1990s many new buildings were put up.

The region of Madrid has quite a dry climate. Most rain falls in autumn and spring. The winters are cold because it is so high up, and sometimes there is snow. The summers are hot. Often the temperature is above 30 °C (86 °F) in July and can often reach 40 °C (104 °F). At night it is much cooler. This is why people have a sleep (siesta) in the afternoon when it is too hot to do anything. Then they come out again in the evening and often eat dinner late at night. 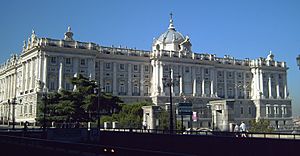 Spain's Royal Palace is in Madrid. It is one of the largest palaces in all of Western Europe. But the king and his family do not live there anymore; they live in a smaller palace, and only use the Royal Palace for important events, like meeting other kings and other official ceremonies. One can go inside the Royal Palace and learn about the history of Spanish monarchy.

Other famous buildings are: The Prado Museum, the Temple of Debod, the Santiago Bernabeú Stadium and the Cuatro Torres Business Area.

There are a lot of very big and important art museums in Madrid. The most famous ones are the Prado Museum, the Queen Sofia Museum, and the Thyssen-Bornemisza museum. These show off paintings, sculptures, and other works of art from some of the most famous artists in the world.

Many famous, important, and valuable works of art are in these museums. For example, the Queen Sofia museum has a famous painting by Pablo Picasso, called Guernica. Picasso painted this painting to show how sad and angry it made him when the German Nazis destroyed a town in Spain called Guernica in 1937. Picasso had said that the painting should never return to Spain until it was a democracy again. Once that happened, they built the Queen Sofia museum just to have a good place to put it.

There are many other sights to see in Madrid. Many people go to see the Plaza Mayor which was a market place. The Plaza de la Villa was another famous market place. There are a lot of shops along the Gran Via. Real Madrid football fans celebrate at the Plaza de Cibeles. Two famous gates to see are the Puerta del Sol and the Puerta de Alcalá. A more recent landmark is the Almudena Cathedral.

Madrid has some lovely parks. The Retiro Park is the most famous. The Cristal Palace can be found in this park.

The Plaza de Toros is visited by many tourists. Many madrileños (people from Madrid) enjoy bullfights there.

One of the most recent sites built in Madrid is the KIO Towers. These are also known as the Gateway to Europe.

All content from Kiddle encyclopedia articles (including the article images and facts) can be freely used under Attribution-ShareAlike license, unless stated otherwise. Cite this article:
Madrid Facts for Kids. Kiddle Encyclopedia.