The Puerta del Sol (Spanish for "Gate of the Sun") is a public square in Madrid, one of the best known and busiest places in the city. This is the centre (Km 0) of the radial network of Spanish roads. The square also contains the famous clock whose bells mark the traditional eating of the Twelve Grapes and the beginning of a new year. The New Year's celebration has been broadcast live on national television since 31 December 1962. 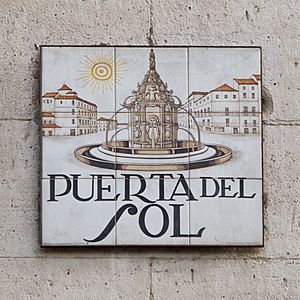 The Puerta del Sol originated as one of the gates in the city wall that surrounded Madrid in the 15th century. Outside the wall, medieval suburbs began to grow around the Christian Wall of the 12th century. The name of the gate came from the rising sun which decorated the entry, since the gate was oriented to the east.

Between the 17th and 19th centuries, the area was an important meeting place: as the goal for the couriers coming from abroad and other parts of Spain to the Post Office, it was visited by those eager for the latest news. The stairs to the Saint Philip church at the square were known as the Gradas de San Felipe, and were among the most prolific mentideros de la Corte (this Spanish idiom sounds as "lie-spreaders of the Court", but it is related with the verb mentar, "to say about someone", not mentir, "to lie", so it is more appropriately translated as "places of the City where people gossip").

The House of the Post Office was built by French architect Jacques Marquet between 1766 and 1768. The building was the headquarters of the Ministry of Interior and State Security in Francoist Spain. It is currently the seat of the Presidency of the Madrid Community.

The Puerta del Sol contains a number of well known sights both domestically and internationally associated with Spain. On the south side, the old Post Office now serves as the office of the President of Madrid, the head of the regional government of the Autonomous Community of Madrid (not to be confused with the Madrid City Council, which is housed elsewhere). Also on its south side, the square holds a mounted statue of Charles III of Spain, nicknamed "el rey alcalde" ("the mayor-king") due to the extensive public works program he set in motion. The famous Tío Pepe lighted sign was above the square's eastern building between the Calle de Alcalá and the Carrera de San Jerónimo (Apple store today) for a long time, now is on top of the former Paris Hotel. Also on the east side lies the statue of The Bear and the Strawberry Tree (in Spanish, el Oso y el Madroño), the heraldic symbol of Madrid. Until 2009, the statue stood on the north side at the entrance to Calle del Carmen. The Mariblanca (a female figure named for its white marble) is a copy of a statue (possibly of Venus, and so the restored pedestal claims), which marks the place of a former fountain displaying that figure.

The kilómetro cero is a plaque on the ground directly north of the Post Office serving as the symbolic center of Spain. In addition to signalling the basis of numbering in the Spanish road system, the symbolic nature of the plaza ensures that it is the site of many rallies and protests, particularly against violence and war. Sol has seen protests against the terrorism perpetrated the March 11th attacks on commuter trains, and Spain's involvement in the Iraq War [1].

In 2011, the square became established as a focal point and a symbol for the ongoing Spanish democracy demonstrations. The demonstrations included camping in the middle of the plaza (@acampadasol), which began on 15 May 2011 amidst the election campaign for city halls and Autonomous Communities governments and which was fueled by social media, particularly Twitter and Facebook. The demonstrations then spread to more than sixty other cities throughout Spain. Since 12 June 2011, the square has held a free-standing domed structure made from pallets, which served as an information point for the 15-M Movement. This continued throughout the summer of 2011 until the dawn of 2 August, when the national police decided to evict the structure and protestors. Currently, dozens of committees have their assemblies in the iconic square. 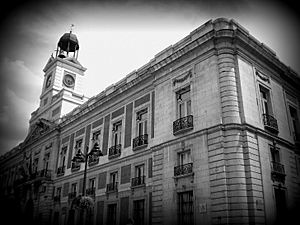 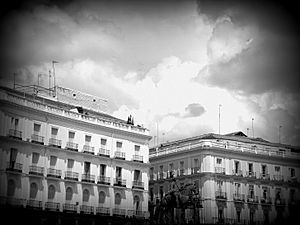 The Puerta is located in the very heart of Madrid. It serves as the kilometre zero from which all radial roads in Spain are measured. This is demonstrated by a plaque on the floor of the square, marking the exact point of Km.0. The old plaque was replaced in 2009, after the old one had become faded after years of foot traffic. It is also the reference for street numbers in Madrid, which begin at the street-end that is closest to Puerta del Sol.

Immediately to the southwest lies the Plaza Mayor; the Palacio Real, the official home of the Royal Family, is further west. Parliament and the museum district are to the east and the train station Atocha is to the southeast.

Under the square lies a public transport hub served by lines 1, 2 and 3 of the Madrid Metro. A commuter service was inaugurated on 27 June 2009, four years behind schedule. The lateness of the construction was in part due to the discovery of the remains of the Church of Our Lady of Good Success during the excavation of the main chamber. The new station connects the Puerta to Madrid's commuter rail system and, by extension, to Spain's railroads via direct connections to Atocha and Chamartín railway stations.

The square connects several commercial and recreational areas together, and thus both it and the surrounding streets consist mainly of shopping establishments catering to locals and tourists alike, like the several El Corte Inglés department store buildings in Preciados Street, La Mallorquina cafe, and numerous, ever-changing restaurants. The area remains active late into the night and early morning since nearby bars and dance clubs often only start entertainment at 1 am. Street music is also common in the area.

Side streets close to the square also contain residential flats, some small offices, and tourist hostels.

During New Year's Eve 2018-2019, the clock of the Puerta del Sol for the first time in history rang the bells according to the schedule of the Canary Islands. After the traditional twelve strokes of midnight, the clock delayed one hour its needles to adjust to the Canary hour and also give the chimes at the same time as this archipelago.

All content from Kiddle encyclopedia articles (including the article images and facts) can be freely used under Attribution-ShareAlike license, unless stated otherwise. Cite this article:
Puerta del Sol Facts for Kids. Kiddle Encyclopedia.