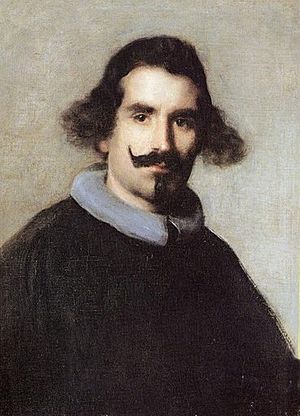 Diego Velázquez (6 June 1599 – August 1660) was a Spanish painter, the leading artist in the court of King Philip IV.

Diego Velázquez had a hard life. He got married when he was eighteen. With his wife, he had two daughters. He died at the age of 61 after having painted many paintings, including Las Meninas.

All content from Kiddle encyclopedia articles (including the article images and facts) can be freely used under Attribution-ShareAlike license, unless stated otherwise. Cite this article:
Diego Velázquez Facts for Kids. Kiddle Encyclopedia.