Aragon is an autonomous community in the northeast of Spain. In the various dialects of Spain it is: in Aragonese: Aragón; in Spanish: Aragón; in Catalan: Aragó.

Aragon covers the area of the medieval Kingdom of Aragon. It is named after the Aragón river, a tributary of the Ebro.

Aragon has three provinces (from north to south): Huesca, Zaragoza and Teruel. Its capital is Zaragoza (sometimes called Saragossa in English).

The lowest point in Aragon is on the Ebro river, close to Zaragoza, with an altitude of 65 m (213 ft) high.

The three main geographical regions of Aragon are:

Most of the Aragonese rivers are tributaries of the Ebro, Spain's largest river in volume and which divides Aragon into two. Some important tributaries on the left side of the river (rivers that come from the Pyrenees) are the Aragón, born in Huesca but flows into the community of Navarre, the Gállego and Cinca, which joins the Segre just before ending up in the Ebro. Right tributaries are the rivers Jalón, Huerva and Guadalupe.

On the Ebro, near the border with Catalonia, lies the Mequinenza Reservoir, with a length of about 110 km, and that is popularly known as the Sea of Aragon. 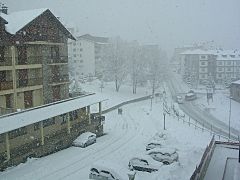 Climatically, Aragon can be divided into three areas:

Aragon consists of three provinces named after their capitals: Huesca, Teruel and Zaragoza. Each province is divided in comarcas (a comarca is a local administrative division) and these are divided in municipalities. 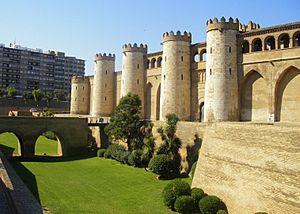 Aragon has a population, in 2013, of 1,347,150, for a population density of 28.2 inhabitants/km2, one of the lowest in Spain. The most densely populated areas are around the valley of the Ebro river, particularly around Zaragoza, and in the Pyrenean foothills (the hills at the base of the Pyrenees), while the areas with the fewest inhabitants tend to be those that are higher up in the Pyrenean mountains, and in most of the southern province of Teruel.

The province of Zaragoza is the one with more inhabitants, with 978,638 people living there, representing 72.6% of the population of Aragon.

The city with more people living in it is the capital, Zaragoza (620,419). The other provincial capitals Huesca and Teruel have, respectively, 47,923 and 31,506 inhabitants. 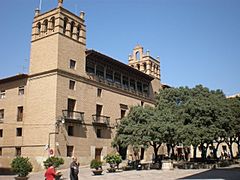 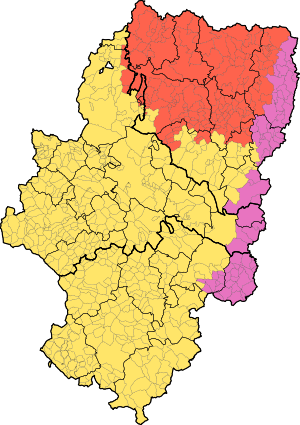 Language distribution in Aragon. Spanish is spoken in all of Aragon.

Spanish is the native language in most of Aragón. The only official language, it is understood and spoken by virtually everyone in the region.Also, Aragonese is still spoken, in several local varieties, in the mountainous northern counties of the Pyrenees, particularly in western Ribagorza, Sobrarbe, Jacetania and Somontano. In the easternmost areas of Aragón, along the border with Catalonia, varieties of Catalan are spoken, including the comarcas of eastern Ribagorza, La Litera, Bajo Cinca, Bajo Aragón-Caspe, Bajo Aragón and Matarraña.

All content from Kiddle encyclopedia articles (including the article images and facts) can be freely used under Attribution-ShareAlike license, unless stated otherwise. Cite this article:
Aragon Facts for Kids. Kiddle Encyclopedia.