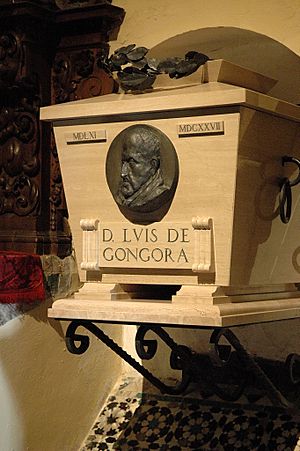 Grave of Luis of Góngora in the Mosque-cathedral of Córdoba.

Luis of Góngora and Argote (Córdoba, 11 July 1561-ib., 23 May 1627) it was a poet and Spanish dramatist of the Century of Gold, maximum exponent of the literary current known later, and with simplification perpetuated during centuries,like culteranismo or gongorismo, whose work will be imitated along the centuries in Europe and America. As if it treated of a classical Latin, his works were object of #exegesis already in his same period 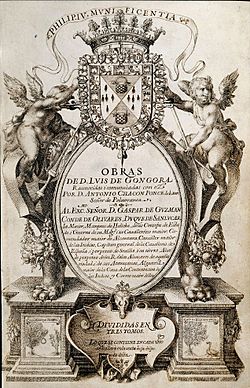 Cover of the Manuscript Chacón, that transmitted the poetic work of Luis of Góngora
Black History Month on Kiddle
African-American Women in Medicine:

All content from Kiddle encyclopedia articles (including the article images and facts) can be freely used under Attribution-ShareAlike license, unless stated otherwise. Cite this article:
Luis de Góngora Facts for Kids. Kiddle Encyclopedia.