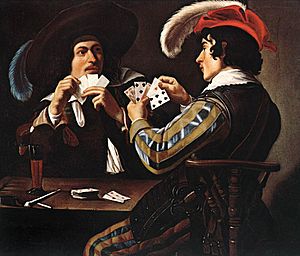 A card game is any game using playing cards, either traditional or game-specific. There is a virtually infinite varety of card games in existance, including families of related games (such as poker). Some games have formally standardized rules, while rules for others can vary by region, or personal preferences.

Although many games have special decks of cards, the standard deck contains 52 cards in four suits (clubs, diamonds, hearts, and spades) and thirteen ranks running from two (deuce) to ten, jack, queen, king, and ace.

Some common card games are poker, bridge, blackjack, and solitaire

There are trading card games like Pokemon and Yu-Gi-Oh! that use special packs. These games often involve fighting role-play.

All content from Kiddle encyclopedia articles (including the article images and facts) can be freely used under Attribution-ShareAlike license, unless stated otherwise. Cite this article:
Card game Facts for Kids. Kiddle Encyclopedia.