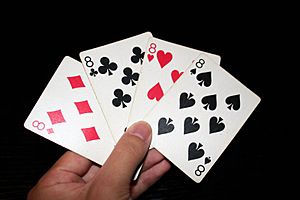 Crazy Eights is a shedding-type card game for two to seven players. The object of the game is to be the first to get rid of all the player's cards to a discard pile. The game is considered a pre-extension of Switch and Mau Mau.

A standard 52-card deck is used when there are five or fewer players. When there are more than five players, two decks are shuffled together and all 104 cards are used.

Eight cards are dealt to each player (or seven in a two-player game). The remaining cards of the deck are placed face down at the center of the table. The top card is then turned face up to start the game.

Players discard by matching rank or suit with the top card of the discard pile, starting with the player left of the dealer. If a player is unable to match the rank or suit of the top card of the discard pile and does not have an 8, they draw cards from the stockpile until they get a playable card. When a player plays an 8, they must declare the suit that the next player is to play; that player must then follow the named suit or play another 8.

As an example: Once 6♣ is played the next player:

The game ends as soon as one player has emptied their hand.

All content from Kiddle encyclopedia articles (including the article images and facts) can be freely used under Attribution-ShareAlike license, unless stated otherwise. Cite this article:
Crazy Eights Facts for Kids. Kiddle Encyclopedia.