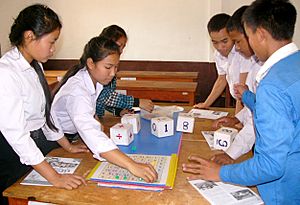 Students in Laos use dice to improve numeracy skills. They roll three dice, then use basic math operations to combine those into a new number which they cover on the board. The goal is to cover four squares in the row. 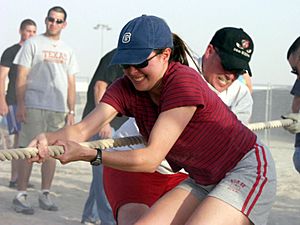 Tug of war is an easily organized, impromptu game that requires little equipment

A game is something that people often do for fun. If so, it is different from work. Many sports are games, and there are many professional sports. In those cases, there is money to be made, because it is a type of entertainment.

There are different kinds of games using many kinds of equipment. For example, in video games, people often use controllers or their keyboard to control what happens on a screen, such as a television screens and computers ones too. In card games, players use playing cards. There are also games that use your body, such as the Kinect. Most games need equipment, but not always. Children's street games often need no equipment.

In board games, players may move pieces on a flat surface called a board. The object of the game varies. In race-type games like ludo, the object is to reach the end first. In go the object is to surround more space. In soccer it is to score more goals. Some games have complicated rules, some have simple rules. 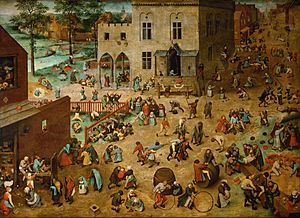 Games can be characterized by "what the player does." This is often referred to as gameplay. Major key elements identified in this context are tools and rules that define the overall context of game. 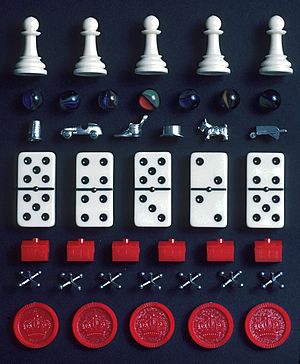 Games are often classified by the components required to play them (e.g. miniatures, a ball, cards, a board and pieces, or a computer). In places where the use of leather is well established, the ball has been a popular game piece throughout recorded history, resulting in a worldwide popularity of ball games such as rugby, basketball, football, cricket, tennis, and volleyball.

Many game tools are tokens, meant to represent other things. A token may be a pawn on a board, play money, or an intangible item such as a point scored.

Rules generally determine the time-keeping system, the rights and responsibilities of the players, and each player’s goals.

Player rights may include when they may spend resources or move tokens. An example of a win condition is having the greatest number of tokens at the end of the game (as in Monopoly). 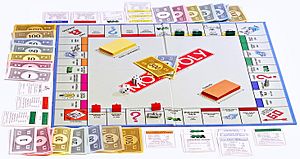 A game’s tools and rules will result in its requiring skill, strategy, luck, or a combination thereof, and are classified accordingly.

Games of skill include games of physical skill, such as wrestling, tug of war, hopscotch, target shooting, and stake, and games of mental skill such as checkers and chess. Games of strategy include checkers, chess, go, arimaa, and tic-tac-toe, and often require special equipment to play them. Games of chance include gambling games (blackjack, mah-jongg, roulette, etc.), as well as snakes and ladders and rock, paper, scissors; most require equipment such as cards or dice. However, most games contain two or all three of these elements. For example, American football and baseball involve both physical skill and strategy while tiddlywinks, poker, and Monopoly combine strategy and chance. Many card and board games combine all three; most trick-taking games involve mental skill, strategy, and an element of chance, as do many strategic board games such as Risk, Settlers of Catan, and Carcassonne. 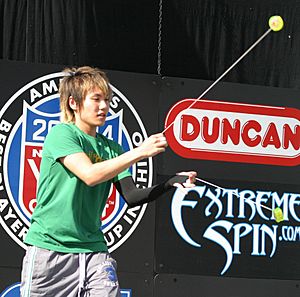 John Ando, a 2A (double looping) division finalist at the 2004 US nationals in Chico, California

Most games require multiple players. However, single-player games are unique in respect to the type of challenges a player faces. Unlike a game with multiple players competing with or against each other to reach the game's goal, a one-player game is a battle solely against an element of the environment (an artificial opponent), against their own skills, against time, or against chance. Playing with a yo-yo or playing tennis against a wall is not generally recognized as playing a game due to the lack of any opposition.

Many games described as "single-player" may be termed actually puzzles or recreations.

Games can take a variety of forms, from competitive sports to board games and video games. 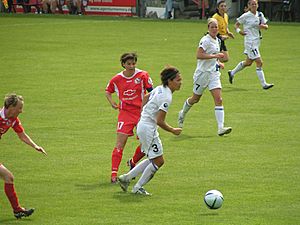 Many sports require special equipment and dedicated playing fields, leading to the involvement of a community much larger than the group of players. A city or town may set aside such resources for the organization of sports leagues.

Popular sports may have spectators who are entertained just by watching games. A community will often align itself with a local sports team that supposedly represents it (even if the team or most of its players only recently moved in); they often align themselves against their opponents or have traditional rivalries. The concept of fandom began with sports fans.

Stanley Fish cited the balls and strikes of baseball as a clear example of social construction, the operation of rules on the game's tools. While the strike zone target is governed by the rules of the game, it epitomizes the category of things that exist only because people have agreed to treat them as real. No pitch is a ball or a strike until it has been labeled as such by an appropriate authority, the plate umpire, whose judgment on this matter cannot be challenged within the current game.

Certain competitive sports, such as racing and gymnastics, are not games by definitions such as Crawford's (see above) – despite the inclusion of many in the Olympic Games – because competitors do not interact with their opponents; they simply challenge each other in indirect ways. 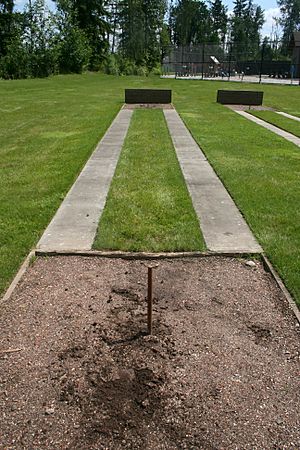 Lawn games are outdoor games that can be played on a lawn; an area of mowed grass (or alternately, on graded soil) generally smaller than a "field" or pitch. Variations of many games that are traditionally played on a pitch are marketed as "lawn games" for home use in a front or back yard. Common lawn games include horseshoes, sholf, croquet, bocce, lawn bowls, and stake.

A tabletop game generally refers to any game where the elements of play are confined to a small area and that require little physical exertion, usually simply placing, picking up and moving game pieces. Most of these games are, thus, played at a table around which the players are seated and on which the game's elements are located.

A variety of major game types generally fall under the heading of tabletop games. 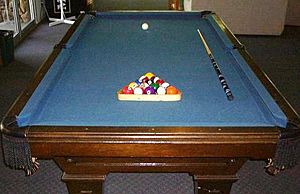 Games such as jacks, paper football, and Jenga require simple equipment and can be played on any flat level surface, while other examples, such as pinball, billiards, air hockey, foosball, and table hockey require specialized tables or other self-contained modules on which the game is played.

The advent of home video game systems largely replaced some of these, such as table hockey, however air hockey, billiards, pinball and foosball remain popular fixtures in private and public game rooms. 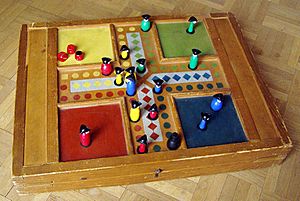 Parcheesi is an American adaptation of a board game originating in India.

Board games use as a central tool a board on which the players' status, resources, and progress are tracked using physical tokens. Many also involve dice or cards.

Some games, such as chess and Go, rely on strategy. Children's games, on the other hand, tend to be very luck-based, likeCandy Land and Chutes and Ladders.

Most other board games combine strategy and luck factors; the game of backgammon requires players to decide the best strategic move based on the roll of two dice. Trivia games have a great deal of randomness based on the questions a person gets. German-style board games are notable for often having rather less of a luck factor than many board games.

Board game groups include race games, roll-and-move games, abstract strategy games, word games, and wargames, as well as trivia and other elements. 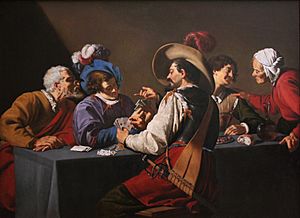 Card games use a deck of cards as their central tool. These cards may be a standard Anglo-American (52-card) deck of playing cards (such as for bridge, poker, Rummy, etc.), a regional deck using 32, 36 or 40 cards and different suit signs (such as for the popular German game skat), a tarot deck of 78 cards (used in Europe to play a variety of trick-taking games collectively known as Tarot, Tarock or Tarocchi games), or a deck specific to the individual game (such as Set or 1000 Blank White Cards). Uno and Rook are examples of games that were originally played with a standard deck and have since been commercialized with customized decks. Some collectible card games such as Magic: The Gathering are played with a small selection of cards that have been collected or purchased individually from large available sets. 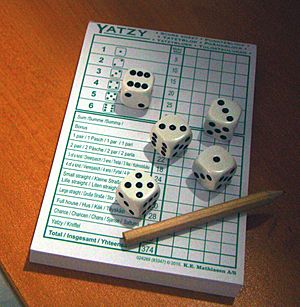 Dice games use a number of dice as their central element. Popular dice games include Yahtzee, Farkle, Bunco, Liar's dice/Perudo, and Poker dice. 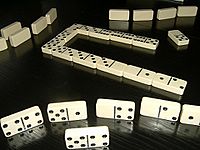 A game of dominoes.

Domino games are similar in many respects to card games, but the generic device is instead a set of tiles called dominoes, which traditionally each have two ends, each with a given number of dots, or "pips", and each combination of two possible end values as it appears on a tile is unique in the set. Muggins, Mexican Train, and Chicken Foot are very popular domino games. Texas 42 is a domino game more similar in its play to a "trick-taking" card game.

Variations of traditional dominoes abound: Triominoes are similar in theory but are triangular and thus have three values per tile. Similarly, a game known as Quad-Ominos uses four-sided tiles.

Mah-Jongg is another game that uses a set of tiles with card-like values and art. 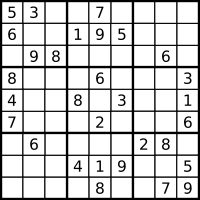 Pencil and paper games require little or no specialized equipment other than writing materials, though some such games have been commercialized as board games (Scrabble, for instance, is based on the idea of a crossword puzzle, and tic-tac-toe sets with a boxed grid and pieces are available commercially). These games vary widely, from games centering on a design being drawn such as Pictionary and "connect-the-dots" games like sprouts, to letter and word games such as Boggle and Scattergories, to solitaire and logic puzzle games such as Sudoku and crossword puzzles. 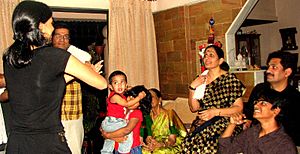 Group guessing the acted out phase in the game of charades.

A guessing game has as its core a piece of information that one player knows, and the object is to get others to guess the information without saying anything. Charades is probably the most well-known game of this type and Guess Who is popular with children. 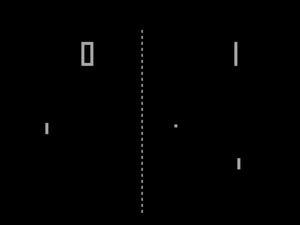 Video games are computer- or microprocessor-controlled games. Computers can create virtual spaces for a wide variety of game types. Some video games simulate conventional game objects like cards or dice, while others can simulate environs either grounded in reality or fantastical in design, each with its own set of rules or goals.

A computer or video game uses one or more input devices, typically a button/joystick combination (on arcade games); a keyboard, mouse or trackball (computer games); or a controller or a motion sensitive tool. (console games). More esoteric devices such as paddle controllers have also been used for input.

There are many genres of video game; the first commercial video game, Pong, was a simple simulation of table tennis.

Modern online games are played using an Internet connection; some have dedicated client programs, while others require only a web browser. Some simpler browser games appeal to demographic groups (notably women and the middle-aged) that otherwise play very few video games. 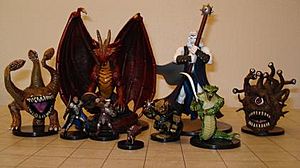 Role-playing games, often abbreviated as RPGs, are a type of game in which the participants (usually) assume the roles of characters acting in a fictional setting. Pen-and-paper role-playing games include, for example, Dungeons & Dragons and GURPS.

There are also many computer or internet role playing games.

All content from Kiddle encyclopedia articles (including the article images and facts) can be freely used under Attribution-ShareAlike license, unless stated otherwise. Cite this article:
Game Facts for Kids. Kiddle Encyclopedia.