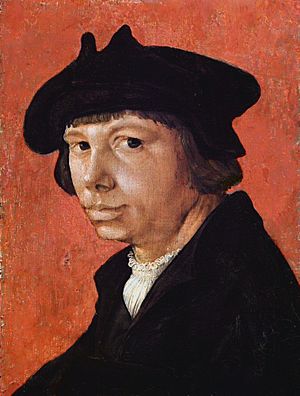 Lucas van Leyden (1494 – 8 August 1533), also named either Lucas Hugensz or Lucas Jacobsz, was a Dutch painter and printmaker in engraving and woodcut. Lucas van Leyden was among the first Dutch exponents of genre painting and was a very accomplished engraver. 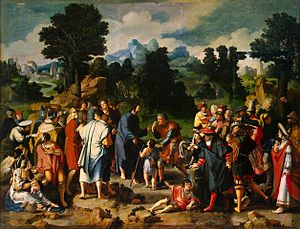 Lucas was the son of the painter Huygh Jacobsz. He was born, died, and was mainly active in Leiden.

Carel van Mander characterizes Lucas as a tireless artist, who as a child annoyed his mother by working long hours after nightfall, which she forbade not only for the cost of candlelight, but also because she felt that too much study was bad for his sensibilities. According to Van Mander, as a boy he only consorted with other young artists, such as painters, glass-etchers and goldsmiths, and was paid by the Heer van Lochorst (Johan van Lockhorst of Leiden, who died in 1510) a golden florin for each of his years at age 12 for a watercolor of St. Hubert.

All content from Kiddle encyclopedia articles (including the article images and facts) can be freely used under Attribution-ShareAlike license, unless stated otherwise. Cite this article:
Lucas van Leyden Facts for Kids. Kiddle Encyclopedia.