Salome or Salomé (Hebrew: שלומית Shlomit), the Daughter of Herodias (c AD 14 - between 62 and 71), like Dismas, or the various names of the Magi, is a name given to a character in the New Testament, one whose name is not given there itself. She is, however, an entirely historical person, whose name is preserved in non-biblical literature. In scholarly works, she tends to be referred to as the Daughter of Herodias.

The name "Salome" is given to the stepdaughter of Herod Antipas (unnamed in the Gospels of Matthew and Mark) in Josephus' Jewish Antiquities (Book XVIII, Chapter 5, 4):

Herodias, [...], was married to Herod, the son of Herod the Great, who was born of Mariamne, the daughter of Simon the high priest, who had a daughter, Salome; after whose birth Herodias took upon her to

confound the laws of our country, and divorced herself from her husband while he was alive, and was married to Herod, her husband's brother by the father's side, he was tetrarch of Galilee; but her daughter Salome was married to Philip, the son of Herod, and tetrarch of Trachonitis; and as he died childless,

Aristobulus, the son of Herod, the brother of Agrippa, married her; they had three sons, Herod, Agrippa, and Aristobulus;

Despite the early date of this account, she was not consistently called Salome until the nineteenth century, when Gustave Flaubert (following Josephus) referred to her as Salome in his play Herodias (1876). 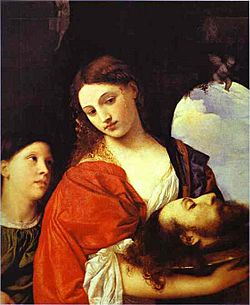 Salome with the Head of John the Baptist by Titian, painted circa 1515 (Galleria Doria Pamphilj, Rome)

According to Mark 6:21-29, Salome was the stepdaughter of Herod Antipas, and danced before Herod and her mother Herodias at the occasion of Herod's birthday, and by doing so caused the death of John the Baptist. The New Testament suggests that Salome caused John to be executed because of his complaints that Herod's marriage to Herodias was adulterous; and that Herodias put her up to the demand that John be executed, something the king was initially reluctant to do.

And when a convenient day was come, that Herod on his birthday made a supper to his lords, high captains, and chief estates of Galilee; And when the daughter of the said Herodias came in, and danced, and pleased Herod and them that sat with him, the king said unto the damsel, Ask of me whatsoever thou wilt, and I will give it thee. And he sware unto her, Whatsoever thou shalt ask of me, I will give it thee, unto the half of my kingdom. And she went forth, and said unto her mother, What shall I ask? And she said, The head of John the Baptist.

And she came in straightway with haste unto the king, and asked, saying, I will that thou give me by and by in a charger the head of John the Baptist. And the king was exceeding sorry; yet for his oath's sake, and for their sakes which sat with him, he would not reject her. And immediately the king sent an executioner, and commanded his head to be brought: and he went and beheaded him in the prison, and brought his head in a charger, and gave it to the damsel: and the damsel gave it to her mother. And when his disciples heard of it, they came and took up his corpse, and laid it in a tomb. (Mark 6:21-29, KJV)

Some ancient Greek translations of Mark read "Herod's daughter Herodias" (rather than "daughter of the said Herodias"). To scholars using these ancient texts, both mother and daughter had the same name. However, scholars using the Latin Vulgate Bible (which translates the passage as it is above) did not confuse the two; thus western Church Fathers tended to refer to Salome as "Herodias's daughter" or just "the girl". Nevertheless, because she is otherwise unnamed in the Bible, the idea that both mother and daughter were named Herodias gained some currency in early modern Europe.

This Salome is not the same Salome who is said to be a witness to the Crucifixion of Jesus in Mark 15:40. (see Salome (disciple)).

The story above has been adapted to various forms of art. Innumerable paintings about it exist. There is a play by Oscar Wilde. Operas about it have been composed by Richard Strauss and Jules Massenet. Ballets by Florent Schmit and Flemming Flindt. Various films have also been made between 1918 and 2006.

All content from Kiddle encyclopedia articles (including the article images and facts) can be freely used under Attribution-ShareAlike license, unless stated otherwise. Cite this article:
Salome Facts for Kids. Kiddle Encyclopedia.