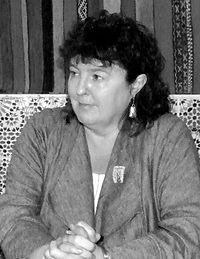 Dame Carol Ann Duffy DBE (born 23 December 1955) is a Scottish poet and playwright. She was born in the Gorbals, Glasgow and moved to Stafford when she was six. On 1 May 2009 she was appointed Britain's poet laureate. She is the first female British poet laureate, as well as being the first Scottish and first openly LGBT one. She was awarded an OBE in 1995, a CBE in 2002, and was made a dame (DBE) in 2015.

All content from Kiddle encyclopedia articles (including the article images and facts) can be freely used under Attribution-ShareAlike license, unless stated otherwise. Cite this article:
Carol Ann Duffy Facts for Kids. Kiddle Encyclopedia.