Alfredo James "Al" Pacino (born April 25, 1940) is an American actor and filmmaker who has had a career spanning more than five decades. He has received numerous accolades and honors both competitive and honorary, among them an Academy Award, two Tony Awards, two Primetime Emmy Awards, a British Academy Film Award, four Golden Globe Awards, two Screen Actors Guild Award, the Lifetime Achievement Award from the American Film Institute, the Cecil B. DeMille Award, and the National Medal of Arts.

He is one of few performers to have won a competitive Oscar, an Emmy, and a Tony Award for acting, dubbed the "Triple Crown of Acting". In addition to his work in film, Pacino has had an extensive career on stage. 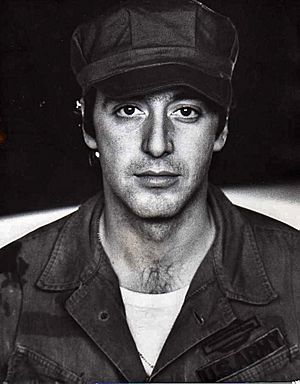 Pacino was born in East Harlem, New York City, to Italian American parents. His parents divorced when he was two years old. His mother took him to The Bronx where they lived with her parents who were immigrants from Corleone, Sicily.

In his teenage years, Pacino was known as "Sonny" to his friends. He had ambitions to become a baseball player and was also nicknamed "The Actor". Pacino attended Herman Ridder Junior High School, but by secondary school he had dropped out of most of his classes except for English. He then attended the High School of Performing Arts, after gaining admission by audition.

His mother disagreed with his decision and, after an argument, he left home. To finance his acting studies, Pacino took low-paying jobs as messenger, busboy, janitor, and postal clerk, and once worked in the mail-room for Commentary magazine.

Growing up in the Bronx, Pacino got into occasional fights and was considered somewhat of a troublemaker at school. Pacino joined the Herbert Berghof Studio (HB Studio), where he met acting teacher Charlie Laughton, who became his mentor and best friend. In this period, he was often unemployed and homeless, and sometimes slept on the street, in theaters, or at friends' houses. 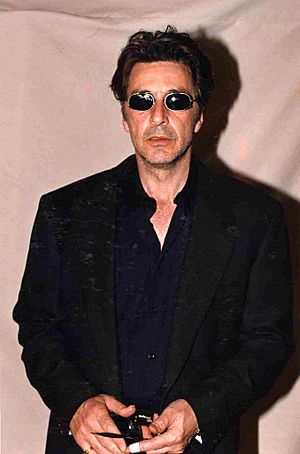 Pacino found acting enjoyable and realized he had a gift for it while studying at The Actors Studio. However, his early work was not financially rewarding. After his success on stage, Pacino made his film debut in 1969 with a brief appearance in Me, Natalie, an independent film starring Patty Duke. In 1970, Pacino signed with the talent agency Creative Management Associates (CMA).

In 2007, the American Film Institute awarded Pacino with a lifetime achievement award. In 2003 British television viewers voted Pacino as the greatest movie star of all time in a poll for Channel 4.

All content from Kiddle encyclopedia articles (including the article images and facts) can be freely used under Attribution-ShareAlike license, unless stated otherwise. Cite this article:
Al Pacino Facts for Kids. Kiddle Encyclopedia.