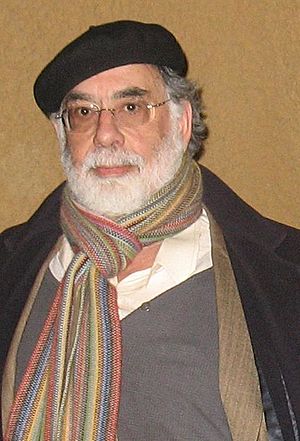 Francis Ford Coppola (born April 7, 1939) is an American director and producer of movies. He is well known for directing the Godfather trilogy and the Vietnam War epic Apocalypse Now. He is part of the group known as the New Hollywood. This group includes Martin Scorsese, Terrence Malick, Robert Altman, Woody Allen, William Friedkin, Philip Kaufman, and George Lucas. In the 1970s they made movies in a different way. He directed the 1986 movie Captain EO.

Coppola was born in Detroit. At age two, he moved to Woodside, Queens, New York City.

Many of his relatives are famous. Actor Nicolas Cage is his nephew. He is the father of Sofia Coppola and Roman Coppola. His first child Gian-Carlo Coppola died in 1986.

All content from Kiddle encyclopedia articles (including the article images and facts) can be freely used under Attribution-ShareAlike license, unless stated otherwise. Cite this article:
Francis Ford Coppola Facts for Kids. Kiddle Encyclopedia.