The British Academy Film Awards are an annual award show hosted by the British Academy of Film and Television Arts (BAFTA). It is the British equivalent of the Oscars. As of 2008, it happens in the Royal Opera House, in London. Before, it was at the Odeon cinema in Leicester Square.

BAFTA is supported by a membership of around 6,000 people from the movie, television and video game industries.

The Academy's awards are look like a theatrical mask. They were designed by American sculptor Mitzi Cunliffe in 1955. 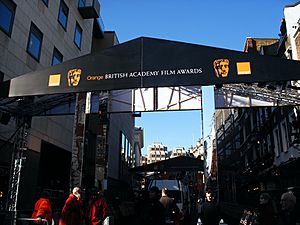 The location for the 2008 ceremony.

The ceremony used to take place in April or May. Starting in 2002 it takes place in February in order to be before the Oscars. The awards are mostly open to all nationalities. There is an award for "Outstanding British Film" and "Outstanding Debut by a British Writer, Producer or Director". The Short Film and Short Animation awards are also only for UK movies.

The Awards ceremony is broadcast on British television, usually the day after it has taken place. It is mostly broadcast on BBC One.

All content from Kiddle encyclopedia articles (including the article images and facts) can be freely used under Attribution-ShareAlike license, unless stated otherwise. Cite this article:
British Academy Film Awards Facts for Kids. Kiddle Encyclopedia.