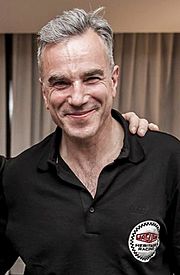 He was born in London, England on 29 April 1957. He had dual citizenship - British and Irish. He is the youngest of Cecil Day-Lewis' four children and the younger of Jill Balcon's two children. His sister, Tamasin Day-Lewis, is a television chef. Day-Lewis married Rebecca Miller (the daughter of Arthur Miller) in 1996. From another relationship Day-Lewis has one son. With Miller, he has two sons.

He starred in most movies, such as My Left Foot, There Will Be Blood and Gangs in New York. He played Abraham Lincoln in Steven Spielberg's 2012 biopic movie Lincoln. He won an Golden Globe Award, Screen Actors Guild Award and an Academy Award for his performance. He retired from acting after starring in his final movie Phantom Thread.

All content from Kiddle encyclopedia articles (including the article images and facts) can be freely used under Attribution-ShareAlike license, unless stated otherwise. Cite this article:
Daniel Day-Lewis Facts for Kids. Kiddle Encyclopedia.