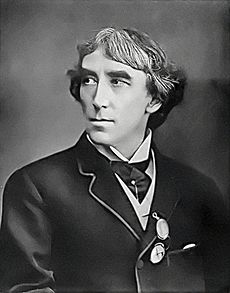 Dracula is a horror novel written by the Irish writer Bram Stoker. Bram Stoker published the novel in England in 1897. Sir Henry Irving was an actor and friend of Bram Stoker. The character 'Dracula' may have been based in part on Irving, and on Vlad III the Impaler. The story in the novel happens in England and Transylvania in 1893.

The young solicitor (a type of lawyer) Jonathan Harker goes to the country Transylvania to sell a house to a nobleman named Dracula. He realizes that Dracula is a vampire. Dracula traps Harker in his castle and goes to England, then bites the young woman Lucy Westenra and turns her into a vampire. Then Dracula bites Jonathan's wife Mina. Because of this the other characters in the book, including Abraham van Helsing and Jonathan Harker, try to stop Dracula.

Most famous adaptations of Dracula

All content from Kiddle encyclopedia articles (including the article images and facts) can be freely used under Attribution-ShareAlike license, unless stated otherwise. Cite this article:
Dracula Facts for Kids. Kiddle Encyclopedia.