Abraham "Bram" Stoker (8 November 1847 – 20 April 1912) was an Irish writer. He is best remembered as the author of the classical and influential vampire (or devil) novel Dracula.

He was born on 8 November 1847 at 15 Marino Crescent—then as now called "The Crescent"—in Clontarf, a coastal suburb of Dublin, Ireland. His parents were Abraham Stoker (born in 1799; married Stoker's mother in 1844; died on 10 October 1876) and the feminist Charlotte Mathilda Blake Thornley (born in 1818; died in 1901). Stoker was the third of seven children. Abraham and Charlotte were members of the Church of Ireland and attended the Clontarf parish church (St. John the Baptist) with their children where both were baptised. Until he started school at the age of seven—when he made a complete, surprising recovery—Stoker was sick. During that time, Stoker wrote, "I was naturally thoughtful, and the leisure of long illness gave opportunity for many thoughts which were fruitful according to their kind in later years."

After his recovery, he became a normal young man even excelling as an athlete at Trinity College, Dublin (1864–70), from which he was graduated with honors in mathematics. He was auditor of the College Historical Society and president of the University Philosophical Society, where his first paper was on "Sensationalism in Fiction and Society". In 1876, while he was employed as a civil servant in Dublin, he wrote theater reviews for The Dublin Mail, a newspaper partly owned by fellow horror writer J. Sheridan Le Fanu. His interest in theater led to a lifelong friendship with the English actor Henry Irving. In 1878 Stoker married Florence Balcombe, a celebrated beauty whose former suitor was Oscar Wilde. The couple moved to London, where Stoker became business manager of Irving's Lyceum Theater, a post he held for 27 years. The collaboration with Irving was very important for Stoker. Through him he became involved in London's high society, where he met, among other notables, James McNeil Whistler and Sir Arthur Conan Doyle. In the course of Irving's tours he got the chance to travel around the world. 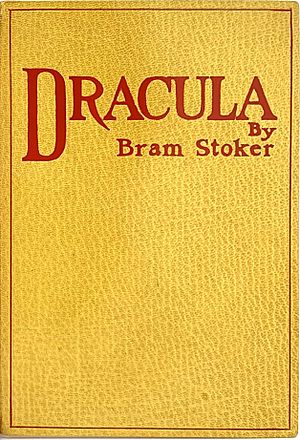 He earned his money by writing a large number of sensational novels, his most famous being the vampire tale Dracula which he published in 1897. Before writing Dracula, Stoker spent eight years researching European folklore and stories of vampires. Dracula is an epistolary novel, written as collection of diary entries, telegrams, and letters from the characters, as well as fictional clippings from the Whitby and London newspapers. Stoker's inspiration for the story was a visit to Slains Castle near Aberdeen. The bleak spot provided an excellent backdrop for his creation.

Dracula has been the basis for countless movies and plays. The first was Nosferatu directed by Friedrich Wilhelm Murnau and starring Max Schreck as Count Orlock. Nosferatu was produced while Florence Stoker, Bram Stoker's widow and literary executrix, was still alive. Represented by the attorneys of the British Incorporated Society of Authors, she eventually sued the filmmakers. Her chief legal complaint was that she had been neither asked for permission for the adaptation nor paid any royalty. The case dragged on for some years, with Mrs Stoker demanding the destruction of the negative and all prints of the movie. The suit was finally resolved in the widow's favour in July 1925. Some copies of the movie survived, however, and Nosferatu is now widely regarded as an innovative classic. The most famous movie version of Dracula is the 1931 production starring Bela Lugosi and which spawned several sequels that had little to do with Stoker's novel.

Stoker wrote several other novels dealing with horror and supernatural themes, but none of them achieved the lasting fame or success of Dracula. His other novels include The Snake's Pass (1890), The Jewel of Seven Stars (1903), and The Lair of the White Worm (1911).

All content from Kiddle encyclopedia articles (including the article images and facts) can be freely used under Attribution-ShareAlike license, unless stated otherwise. Cite this article:
Bram Stoker Facts for Kids. Kiddle Encyclopedia.