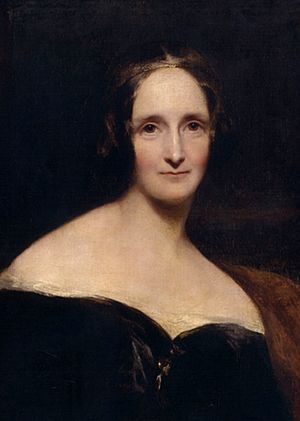 Mary Shelley. This painting was made in 1840

Mary Wollstonecraft Shelley (30 August 1797 – 1 February 1851) was an English author best known for writing the novel Frankenstein. She was in her teens when she wrote the book that is now a classic.

Mary Shelley was born on 30 August 1797 in London. She was the second daughter in her family. Her parents were Mary Wollstonecraft, a feminist, and William Godwin, a philosopher. Her mother died in childbirth. Her father was quick to marry again. Mary got a great education, something most girls did not have at the time.

During May of 1816, Mary and her future husband Percy Bysshe Shelley, travelled to Lake Geneva to spend summer near the famous poet Lord Byron. In terms of English literature, it was a great summer. Percy began work on "Hymn To Intellectual Beauty" and "Mont Blanc". At the same time, Mary was inspired to write her classic work.

One evening, the group of young writers decided to have a contest telling horror stories. Another guest, Dr John Polidori, came up with The Vampyre, later a strong influence on Bram Stoker's Dracula. Other guests told scary stories, but Mary could not think of one. But that night, she dreamt of the story she had wanted to tell. She wrote it down, and in time, her story would be published as Frankenstein, and it became more successful than any of the other writings produced that summer.

Mary had a number of different sources for her work; one was the Promethean myth from Ovid. The influence of John Milton's Paradise Lost (the book the 'monster' finds in the cabin) is also clearly seen in the novel. Also, both Shelleys had read William Beckford's Vathek.

Mary and Percy were both vegetarians, and strong advocates for animal rights. One can see references to vegetarianism in her writing. For example, in her novel Frankenstein, the 'monster' was a vegetarian.

Returning to England in September of 1816, Mary and Shelley were stunned by two family deaths in quick succession. First, in November, Mary's older half-sister, Fanny Imlay. Only weeks later, Shelley's first wife drowned in London's Hyde Park. Discarded and pregnant, she had not welcomed Shelley's invitation to join Mary and himself in their new household.

Shortly after Harriet's death, Shelley and Mary were married, now with Godwin's blessing. Their attempts to gain custody of Shelley's two children by Harriet failed, but their writing careers enjoyed more success when, in the spring of 1817, Mary finished Frankenstein.

Mary had two sons and a daughter. The daughter died in infancy and the elder son when he was two.

Three films have shown Mary Shelley, and the basic idea of the Frankenstein story in 1816: Gothic directed by Ken Russell (1986), Haunted Summer directed by Ivan Passer (1988) and Remando al viento (English title: Rowing with the Wind) directed by Gonzalo Suárez (1988).

Mary Shelley died of brain cancer on February 1, 1851 in London, and was buried at St. Peter's Churchyard in Bournemouth, in the English county of Dorset

All content from Kiddle encyclopedia articles (including the article images and facts) can be freely used under Attribution-ShareAlike license, unless stated otherwise. Cite this article:
Mary Shelley Facts for Kids. Kiddle Encyclopedia.