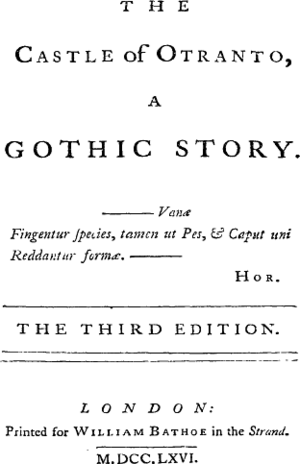 Gothic fiction is a genre of literature which combines parts of both horror and romance. The genre is said to have started in England in 1764 with Horace Walpole's book The Castle of Otranto. Its second edition was subtitled A Gothic Story. The idea quickly spread to other European languages.

A famous early example of gothic fiction is Frankenstein by Mary Shelley, in the early 19th Century. The works of Edgar Allen Poe and Bram Stoker's Dracula followed later.

All content from Kiddle encyclopedia articles (including the article images and facts) can be freely used under Attribution-ShareAlike license, unless stated otherwise. Cite this article:
Gothic fiction Facts for Kids. Kiddle Encyclopedia.