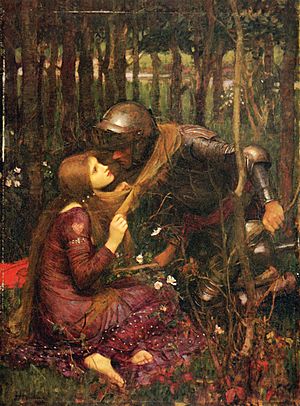 Romance is a feeling of excitement and mystery associated with love. In relationships, it involves a strong emotional attraction towards the other person. Romantic love is the opposite of platonic love.

Romance is often strongest at the beginning of relationships. It comes with uncertainty and anxiety that the love may not be returned.

The modern concept of romantic love comes from the medieval ideals of chivalry, as set out in its chivalric romance literature. It was made popular in Western culture by the concept of courtly love. Knights were often said to have had intimate relationships with the noble ladies they served. Since marriage was commonly just a formal arrangement without love, courtly love allowed women to be emotionally intimate with a man.

Romance is a major theme found in art, particularly literature and fiction. It is often found in fairy tales, women's fiction and the writings of people like William Shakespeare.

All content from Kiddle encyclopedia articles (including the article images and facts) can be freely used under Attribution-ShareAlike license, unless stated otherwise. Cite this article:
Romance (love) Facts for Kids. Kiddle Encyclopedia.