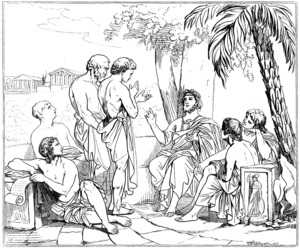 Plato and his students

Platonic love or platonic relationship means a close relationship between two people that is not physical. In the modern use it has generally been used to mean a non-physical relationship between heterosexual friends. The term is named after the philosopher Plato. He was the first to describe this kind of love. Plato calls this his theory of erôs (meaning "love"). He describes this philosophy in his dialogues the Phaedrus and the Symposium.

All content from Kiddle encyclopedia articles (including the article images and facts) can be freely used under Attribution-ShareAlike license, unless stated otherwise. Cite this article:
Platonic love Facts for Kids. Kiddle Encyclopedia.