Romeo and Juliet facts for kids 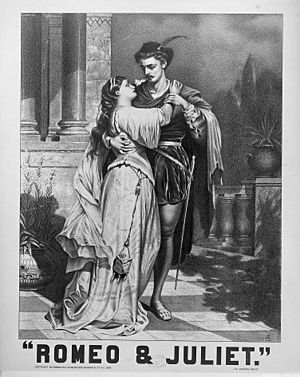 Romeo and Juliet is a play written by William Shakespeare. It is set in Italy and is about the love between two young people from noble families that are enemies. Romeo and Juliet has always been one of Shakespeare's most popular plays. It has been adapted to opera, ballet, television productions, and movies. 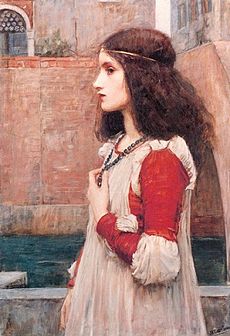 Verona is ruled by Prince Escalus. He tells the Montagues and the Capulets that they have to stop fighting or they will be punished. It is very difficult to control the young men. Montague has only one child, a teenage boy called Romeo. Capulet also has only one child, a beautiful 14-year-old daughter called Juliet. They do not know each other, because Juliet never goes anywhere without her nursemaid. Romeo and his friends go to a masked ball at the home of Juliet's parents. Romeo and Juliet meet at a party and fall in love.

Because they think they will get into trouble with their parents, they try to hide their love by not talking about it at home. Juliet knows that her parents want her to marry a cousin of the prince. Romeo and Juliet get married in secret. Because of their secret marriage, a lot of things happen which bring about many deaths, including, finally, Romeo and Juliet kill themselves. 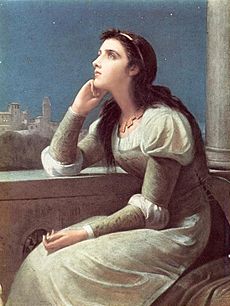 Juliet says "If they do see thee, they will murder thee!"

Examples: "morn" for "morning; "morrow" for "tomorrow"; "woe" for "unhappiness".

Romeo and Juliet, like many of Shakespeare's plays, is written in several different forms.

For example, two Capulet servants are planning to cause trouble with two Montague servants who are walking down the street.

Sampson: "Let us take the law of our side! Let them begin!"
Gregory: "I will frown as I pass by, and let them take it as they list!" (however they like)
Sampson: "I will bite my thumb at them, which is a disgrace to them, if they bare it!"

For example, when Friar Laurence goes out to tend his garden in the early morning, he says:

"The grey eyed Morn smiles on the frowning Night
Checkering the eastern clouds with streaks of light."

("Morn" is used to mean morning in poetry) 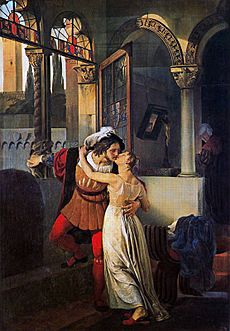 Romeo and Juliet by Francesco Hayez, 1823

For example, Juliet, who is anxious to get a message from Romeo says:

"The clock struck nine when I did send the nurse!
In half an hour, she promised to return!"

The Prince says to Montague and Cauplet:

"A glooming peace this morning with it brings;
The sun for sorrow will not show his head.
Go hence to have more talk of these sad things;
Some shall be pardoned and some punish-ed:
For never was a story of more woe
Than this of Juliet and her Romeo."

The most famous scene 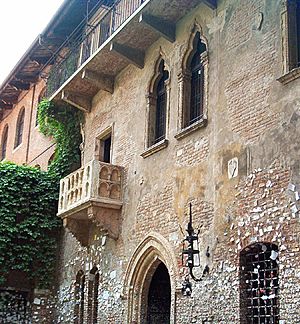 This old house in Verona is called the House of Juliet. Messages are stuck into the bricks.

Of all the scenes that have ever been written in plays, one of the most famous is in Romeo and Juliet.

After Romeo and Juliet have met at a party and fallen in love, Juliet goes up to bed. But she cannot sleep so she stands at her window and pretends she is talking with Romeo.

Romeo is going past and says "But soft, what light through yonder window breaks? ...It is my Lady! O, it is my Love!"

Juliet, not knowing he is there, says "Romeo, Romeo, wherefore art thou Romeo?" (Romeo, Romeo, why do you have to be who you are?) She wishes he was not called Romeo Montague but had some different name, so he was not an enemy.

Romeo climbs up onto the balcony. Juliet tells Romeo that her love for him is as deep and endless as the sea. They part from each other with the famous words:

"Good night! Good night! Parting is such sweet sorrow,
That I shall say Good night till it be morrow." (tomorrow)

This romantic scene has been acted and copied many times, sometimes seriously and sometimes for fun. One well-known scene that took its idea from this, is from West Side Story, a musical by Leonard Bernstein, which takes place on a fire-escape landing with the lovers, Tony and Maria, singing the lovesong, Tonight.

Movies and music based on the play

Romeo and Juliet has been performed on stage many times. There have also been forty different movies 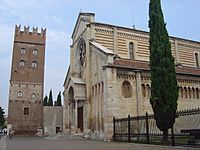 The Church of San Zeno where, by tradition, Romeo and Juliet were secretly married.

All content from Kiddle encyclopedia articles (including the article images and facts) can be freely used under Attribution-ShareAlike license, unless stated otherwise. Cite this article:
Romeo and Juliet Facts for Kids. Kiddle Encyclopedia.