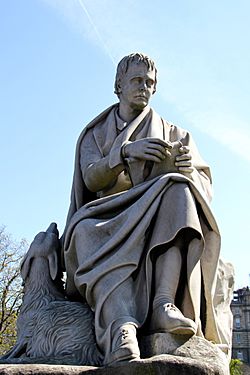 Sir Walter Scott, 1st Baronet, FRSE (15 August 1771 – 21 September 1832) was a Scottish historical novelist, playwright, and poet, widely popular in the first half of the 19th century.

Scott was the first English-language author to have a truly international career in his lifetime. As adventures, Ivanhoe, and Rob Roy are very well-known, and both were made into films. Waverley is important because it is the first historical novel. It was, for most readers, their first encounter with Highland culture. Scott wove together history and fiction. What he started with Waverley, he continued with his other novels.

Scott's output was huge. Though many of his works are little read now, they sold well in their day, and paid for his great house, Abbotsford. Of his poetry The Lady of the Lake is best liked.

Scott was also an advocate, judge and legal administrator by profession. Throughout his career he combined his writing and editing work with his daily occupation as Clerk of Session and Sheriff-Depute of Selkirkshire.

A prominent member of the Tory establishment in Edinburgh, Scott was an active member of the Highland Society and served a long term as President of the Royal Society of Edinburgh (1820–32).

Scott was educated at Edinburgh High and the University of Edinburgh, graduating in 1783. After spending some time in his father's office he became a barrister in 1792. In 1797 he married Charlotte Charpentier and in 1799 was appointed deputy Sheriff of Selkirkshire. He now began to write books in earnest. In 1821 he was made a baronet. His house is now a public museum visited by many tourists each year.

In 1825 and 1826, a banking crisis swept through the cities of London and Edinburgh. The Ballantyne printing business, in which he was heavily invested, crashed. Scott was ruined. He placed his house and income in a trust belonging to his creditors, and set out to write his way out of debt.

He kept up his huge output of fiction, as well as producing a biography of Napoleon Bonaparte. By 1831 his health was failing. Still, he did a grand tour of Europe, where he was welcomed wherever he went. He returned to Scotland and, in September 1832, died at Abbotsford, near Melrose in the Roxburghshire. Though he died owing money, his novels continued to sell well. The debts of his estate were eventually discharged.

All content from Kiddle encyclopedia articles (including the article images and facts) can be freely used under Attribution-ShareAlike license, unless stated otherwise. Cite this article:
Walter Scott Facts for Kids. Kiddle Encyclopedia.