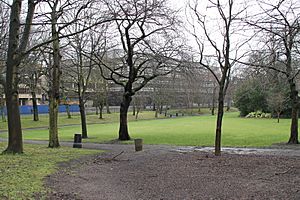 Gardens in George Square, with the university library in the background

George Square is a city square in Edinburgh, Scotland. It is in the south of the city centre, adjacent to the Meadows. It was laid out in 1766 outside the overcrowded Old Town, and was a popular residential area for Edinburgh's better-off citizens. In the 1960s much of the square was redeveloped by the University of Edinburgh, despite the protests of the Cockburn Association and the Georgian Group of Edinburgh. Most but not all buildings on the square now belong to the university (among the exceptions being the Dominican priory of St Albert the Great). Principal buildings include the Main Library, David Hume Tower and Appleton Tower. 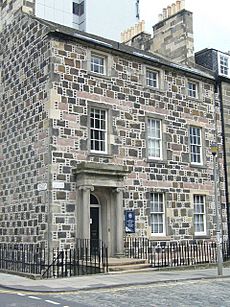 A Georgian house at the north-east corner of the square

The University of Edinburgh began drawing up plans to redevelop the square in the 1950s. Architects Basil Spence, Robert Matthew were closely involved in the plans. Opposition to demolition of the Georgian Square was led by the Cockburn Association, and the Georgian Group of Edinburgh which was established by Colin McWilliam and others to resist the proposals. In the end, the western side of the square was retained. On the northern side, the 19th century George Watson's Ladies College was retained alongside the modern Hugh Robson Building. Georgian terraces were retained along half of the east side, while the southern side was entirely redeveloped. The David Hume Tower stands at the south-east corner, adjacent to the main lecture theatre and the business school. The Main Library occupies most of the southern side of the square.

During August each year, the square becomes an important hub for events at the Edinburgh Festival Fringe. Many of the university buildings, notably George Square Theatre and the lecture theatres in the David Hume Tower complex are converted to use as venues by venue operator Assembly. The gardens are filled with bars and pop-up venues, including, in recent years while nearby Bristo Square is being renovated, the well-known Underbelly purple cow venue.

All content from Kiddle encyclopedia articles (including the article images and facts) can be freely used under Attribution-ShareAlike license, unless stated otherwise. Cite this article:
George Square, Edinburgh Facts for Kids. Kiddle Encyclopedia.