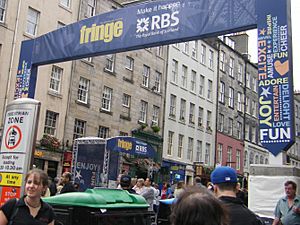 The gate for the street fair portion of the festival on the Royal Mile, in August 2007.

The Edinburgh Festival Fringe (The Fringe) is the world’s largest arts festival. It started in 1947. It takes place every year at the same time as the Edinburgh International Festival: late August and early September. There are hundreds of different events, ranging from concerts, theatre, opera, dance to many informal events such as street performers.

The organisers are the Festival Fringe Society: they publish a programme every year, sell tickets and give advice to performers from the Fringe office on the Royal Mile.

All content from Kiddle encyclopedia articles (including the article images and facts) can be freely used under Attribution-ShareAlike license, unless stated otherwise. Cite this article:
Edinburgh Festival Fringe Facts for Kids. Kiddle Encyclopedia.