Stevenson is known for his books, Treasure Island, Kidnapped, and Strange Case of Dr Jekyll and Mr Hyde. In 1857 Stevenson went to a school called Mr Henderson's School in India Street, Edinburgh. When poor health stopped him going to school, he had private tutors teaching him. 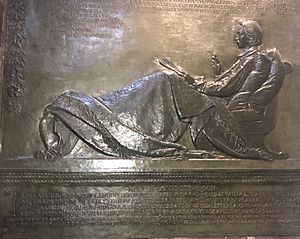 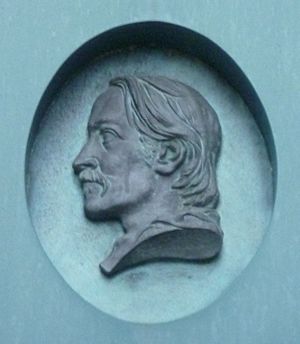 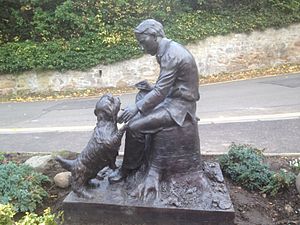 Statue of Stevenson as a child, outside Colinton Parish Church in Edinburgh

The Writers' Museum near Edinburgh's Royal Mile devotes a room to Stevenson, containing some of his personal possessions from childhood through to adulthood.

The Stevenson House at 530 Houston Street in Monterey, California, formerly the French Hotel, memorializes Stevenson's 1879 stay in "the Old Pacific Capital", as he was crossing the United States to join his future wife, Fanny Osbourne. The Stevenson House museum is graced with a bas-relief depicting the sickly author writing in bed.

The Robert Louis Stevenson Museum in St. Helena, California, is home to over 11,000 objects and artifacts, the majority of which belonged to Stevenson. Opened in 1969, the museum houses such treasures as his childhood rocking chair, writing desk, toy soldiers, and personal writings among many other items. The museum is free to the public and serves as an academic archive for students, writers, and Stevenson enthusiasts.

Stevenson's former home in Vailima, Samoa is now a museum dedicated to the later years of his life. The museum collection includes several original items belonging to Stevenson and his family. The path to Stevenson's grave at the top of Mt Vaea commences from the museum.

A bronze relief memorial to Stevenson, designed by the American sculptor Augustus Saint-Gaudens in 1904, is mounted in the Moray Aisle of St Giles' Cathedral, Edinburgh. Saint-Gaudens' scaled-down version of this relief is in the collection of the Montclair Art Museum. Another small version depicting Stevenson with a cigarette in his hand rather than the pen he holds in the St. Giles memorial is displayed in the Nichols House Museum in Beacon Hill, Boston.

Another memorial in Edinburgh stands in West Princes Street Gardens below Edinburgh Castle; it is a simple upright stone inscribed with "RLS – A Man of Letters 1850–1894" by sculptor Ian Hamilton Finlay in 1987. In 2013, a statue of Stevenson as a child with his dog was unveiled by the author Ian Rankin outside Colinton Parish Church. The sculptor of the statue was Alan Herriot, and the money to erect it was raised by the Colinton Community Conservation Trust.

A plaque above the door of a house in Castleton of Braemar states "Here R.L. Stevenson spent the Summer of 1881 and wrote Treasure Island, his first great work".

A garden was designed by the Bournemouth Corporation in 1957 as a memorial to Stevenson, on the site of his Westbourne house, "Skerryvore", which he occupied from 1885 to 1887. A statue of the Skerryvore lighthouse is present on the site.

In 1966, the Canadian actor Lloyd Bochner played Stevenson in the episode "Jolly Roger and Wells Fargo" of the syndicated American television series, Death Valley Days, hosted by Robert Taylor and directed by Denver Pyle. In an earlier Death Valley Days episode from 1958, "The Great Amulet", hosted by Stanley Andrews, the actor Don Reardon (died 2004) played the role of Stevenson. In the story line, Stevenson falls in love with Fanny Osbourne, played by Aline Towne (1919-1996), the mother of two children in a loveless marriage in San Francisco. The couple met in France where Stevenson was recuperating from health issues and moved to San Francisco, where Stevenson worked tirelessly despite lingering health matters in the production of his large volume of literary works. "The Great Amulet" is revealed at the conclusion of the episode.

In 1994, to mark the 100th anniversary of Stevenson's death, the Royal Bank of Scotland issued a series of commemorative £1 notes which featured a quill pen and Stevenson's signature on the obverse, and Stevenson's face on the reverse side. Alongside Stevenson's portrait are scenes from some of his books and his house in Western Samoa. Two million notes were issued, each with a serial number beginning "RLS". The first note to be printed was sent to Samoa in time for their centenary celebrations on 3 December 1994.

At least six US elementary schools are named after Stevenson, in the Upper West Side of New York City, in Fridley, Minnesota, in Burbank, California, in Grandview Heights, Ohio (suburb of Columbus), in San Francisco, California, and in Merritt Island, Florida. There is an R. L. Stevenson middle school in Honolulu, Hawaii and in Saint Helena, California. Stevenson School in Pebble Beach, California, was established in 1952 and still exists as a college preparatory boarding school. Robert Louis Stevenson State Park near Calistoga, California, contains the location where he and Fanny spent their honeymoon in 1880.

A street in Honolulu's Waikiki District, where Stevenson lived while in the Hawaiian Islands, was named after his Samoan moniker: Tusitala. This was also (until recently changed) the name of a restaurant on Comiston Road, Edinburgh on the route of a favourite walk that Stevenson often took to the village of Swanston in the Pentland Hills.

The Chemin de Stevenson (GR 70) is a popular long-distance footpath in France that approximately follows Stevenson's route as described in Travels with a Donkey in the Cévennes. There are numerous monuments and businesses named after him along the route, including a fountain in the town of Saint-Jean-du-Gard where Stevenson sold his donkey Modestine and took a stagecoach to Alès.

A memorial by Gutzon Borglum was unveiled, in 1915, at Baker Cottage, Saranac Lake, New York.

All content from Kiddle encyclopedia articles (including the article images and facts) can be freely used under Attribution-ShareAlike license, unless stated otherwise. Cite this article:
Robert Louis Stevenson Facts for Kids. Kiddle Encyclopedia.